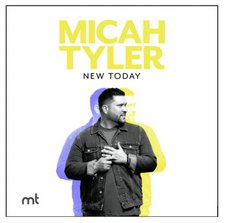 
Micah Tyler made his splash in the CCM industry back in 2017, with his debut record, Different. Three years later, he now returns with his sophomore effort, New Today, an 11-track endeavour that focuses on various topics surrounding Gods mercy and grace. Generally speaking, Micahs style revolves around gospel-infused pop, relatively similar to artists such as Ryan Stevenson and Zach Williams.

The record opens up with the upbeat Amen, which is one of the stronger songs featured here, as he sings, How could I hide this joy inside of me / Amazing grace, oh Lord, how can it be / Every day of my life I want the world to see / I can't get over what You've done for me. The slower, reflective title track is also a highlight, as Micah passionately proclaims Your mercies are new today. Other standouts include the upbeat Walking Free, and the bubbly Welcome To The Family." The latter speaks about the joy that can be found in the family of God, and the way everyone rejoices when another soul is saved; which, paired with the fun musical backing creates an enjoyable song.

Unfortunately, the rest of the album falls short of the bar set by those numbers, as most tracks follow the same generic formula. Songs like By Name, Love Lifted Me, and Without Love cover topics that have been written about hundreds of times by other artists; and ultimately sound quite repetitive as they run into each other. Also, the addition of a stripped version of the title track as the closer makes no sense, as it is almost identical to the original (minus the choir) and serves no real purpose.

With that being said, New Today does have a few bright spots. Micahs smooth voice paired with background vocalists on tunes like Walking Free and My God Fights For Me works quite well, and are examples of what he does best. It's a shame that we dont see more creativity from an artistic standpoint, because he has the potential to do something different and unique. While his sound isn't bad, he doesnt do much to separate himself from the rest of the bunch, both musically and lyrically. Most of what is featured here has already been done before countless times, which is nothing new considering he is in the CCM industry, where repetition is a common occurrence. For fans of Micah, or the pop genre, this album will be satisfactory; those looking for something new and innovative, however, should look elsewhere.