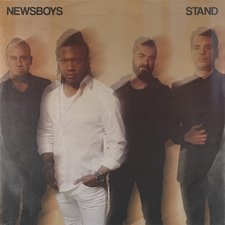 
After the historic run of Newsboys United, which featured former members Peter Furler and Phil Joel, came to a close (mainly due to the pandemic), the rest of the group took some time to rediscover their identity. It has been five years since the Newsboys released an album without the United label, but they are back with STAND, a ten-track outing that revolves around the assurance we all have in Christ.

The energetic "Magnetic" kicks things off, led by Jody Davis' funky guitar chops. Michael Tait's smooth vocals are on full display, as he sings "I've pushed away, but I can't escape / Your love keeps pulling me back, pulling me back / It's magnetic". "Ain't It Like Jesus" follows suit, with its reggae-inspired composition, and is a solid number. The band's bold desire to stand for Jesus, no matter what, is made clear in the title track: "I'm not ashamed, I've considered the cost / I'll stay right here at the foot of the cross / And stand!".

As the album moves into the second half, enjoyable tunes, like "Clean" and "Come Through," help maintain an upbeat pace. Most of the songs featured here carry a joyful and buoyant vibe, with "Blessings on Blessings" being a perfect example; "I've got blessings on blessings, written all over my life / Even when things are going wrong, I've got so much going right." "Never Too Far Away" serves as a reflective closer, holding similarities to hits such as "We Believe" or "Guilty".

STAND sees the Newsboys taking a mainstream pop approach to their style, more so than previous efforts. Fans looking for something edgier, i.e. "Crazy" or "Born Again," will not find it on this project. The record certainly draws comparisons to some of the material found on Restart, along with the worshipful elements from their United release. Soaring choruses, toned down guitars, and poppy layers fill up each and every track, but there is enough diversity to keep the listener engaged from start to finish.

At the end of the day, the Newsboys have put together a solid pop record that fits nicely into their discography. It isn't going to shake up the industry, but everything the band produces has a certain level of quality which sets them apart from the rest. Fans of the Tait-era Newsboys should definitely want to pick this one up - but those searching for a bit more variety and creativity may want to look elsewhere.