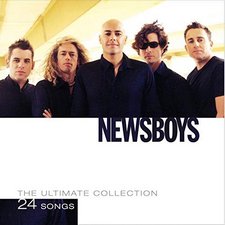 
The Newsboys are one of the most successful bands in the Christian music industry. This is evident in the 26 #1 hits they had under their belt by early 2009, along with numerous amounts of other singles. With a discography like these guys, slimming all their songs down to a collection of twenty-four hits is unlikely to result in a flawless product.

Despite that reality, this is pretty reasonable compared to many "greatest hits" albums that are released. This album contains songs from every Newsboys studio album released from 1992 to 2006 and two of their previous "greatest hits" albums, Shine... the Hits and Greatest Hits (2007), along with their VeggieTales song "Belly of the Whale." In other words, this is a large (but not necessarily ultimate) collection of Newsboys songs from the entire time (up to this point) that Peter Furler had provided vocals for the Newsboys.

This album contains many songs that make sense in this collection. There are others that make less sense, such as "In Christ Alone," "I Fought the La," "Devotion" and "Woohoo." Some songs that are missing from this collection (that would make more sense) are "I am Free," "Reality," "Presence (My Heart's Desire)," "Lord (I Don't Know)" and "In Wonder." I also feel like some songs from their next studio album, In the Hands of God (which was released the very next month), could have been put on this album, but I don't know if the Newsboys were entirely involved in the production of this album or if it was merely a record label thing.

In conclusion, Newsboys: The Ultimate Collection is a hefty compilation of songs summarizing the Peter Furler era of the band that will be great for beginners, but not for a fan who already has many Newsboys albums (including "greatest hits" albums). I am speaking from experience as this was the first Newsboys album that I ever owned and I enjoyed it very much as my CD collection was much smaller then.