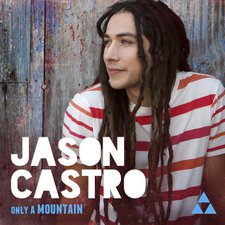 Jason Castro
Only A Mountain

Another season of American Idol is almost upon us, and it's fitting (and surely timely planned) that an 'Idol alumnus is releasing a new album. Jason Castro, season seven's fourth place finisher, is a feature artist on this year's Winter Jam tour, and Only A Mountain fits in well with the vibe of the other artists currently on that tour.

The title track opens the album with a jaunty piano line and vocals that are reminiscent of classic PFR or the Beatles' Sir Paul McCartney. The song's message of hope, with a strong reference to Jesus' statement about faith in Matthew 17:20--that with faith you can "move mountains"--serves as a nice opening statement for a series of encouraging songs.

Continuing the theme of hope, "I Believe" (though it unimaginably shares its title with about fifty other songs), is a nice take on holding on to your faith through times of trials. In this same vein, "Rise To You" is a pleasant song of worship, directed prayerfully to the Lord, asking him to "calm my heart before I fall apart."

"The Same Kind Of Broken" musically diverts from the sonic blueprint just a bit (and bears a much better title than anything else on the album). With its finger-picked intro and excellent guest vocal from Moriah Peters, this tune presents a humble look at the humanity represented on a local street corner and is an album highlight.

The following number, "Safehouse," takes a look at the difficult issue of human trafficking, and admirably invites the listener to "do more than just pray." It is encouraging that evangelicals are bringing light to an otherwise swept-aside subject.

Castro shines best on the two overtly, relationship-oriented songs on the album. "If It's Love" shares the details of an argument that is further frustrated by distance and schedules. But Castro rightly notes that "if it's love, then love is worth the fight." This tricky language smartly suggests that love is "worth fighting for," not that it was worth fighting in the first place, but worth struggling though if it is going to last. "Good Love" is a love song that closes the album with its ukulele strum and breezy tone, ending the record on a nice note.

In the end, Only A Mountain fits sonically with other Idol alumnus' albums (that is to say, the music is mostly "safe" pop and designed to appeal to the widest possible audience), but still shines brightly in spots and points to Castro having a long career ahead of him.