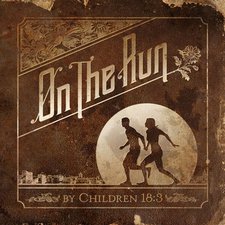 "It's like a quick punch in the mouth, and then you ask for another," is how Children 18:3 was recently described to me by a friend. After the Hostetter siblings' self-titled and rambunctious 2008 debut, and the follow up (Rain's 'A Comin') two years later, I'd tend to agree with the description. So it is with trepidatious and eager expectation that fans receive On The Run, and prepare for another blow to the aperture.

Upon first listen, On The Run appears to be another album in the same vein as those that came before. The unmistakable tempo, grinding guitars, dual vocals, and signature presence are all here. The organic, aggressive edge of those prior albums may seem slightly blunted, but upon closer inspection, the energy and ambitious nature of the project become evident. The production switches occasionally between the raw and the melodic, and overall feels much more refined and fleshed-out. Perhaps it's natural artistic growth, or the influence of producer Travis Wyrick (P.O.D. / Pillar) that yields the cleaner sound. Songs like "Bandits" and "What About Justice?" stay closest to the shore, however there is a definite, obvious effort to push things in alternate creative directions. The truest elements of what makes Children 18:3 who they are serve as foundation - but what is built upon that spine is intriguing.

One such aggrandized staple is the dual-vocals nature of the band. Brother David might take lead singer duty most often, but not without sister Lee Marie harmonizing, echoing, or otherwise fleshing out the lyric - and vice-versa. "We'll Never Say Goodbye" shows off just how the years of performing have augmented Lee Marie's range - as she flawlessly delivers one of the album highlights, singing "Who has never been afraid of the dark / When you can hear the future howling at your door? / I never doubted you could take it this far / But it's better to weather the storm." It takes half the album's length for the tempo to drop below ballistic levels, but when it does, the listener bears witness to the strongest vocal harmonies David and Lee Marie have yet achieved in the haunting ballad "Always On The Run."

As good as the vocals continue to be, the musicianship and songwriting ability the siblings possess continues to improve. Seth's drum fills are sometimes ambitious, and despite the varying cadence swells of "Moment to Moment" or "Holding On," his method serves to hold each song to its tether with deft of simplicity. David's guitar work serves each song's hue - shifting from guttural fuzz to anthemic soloing. With a key change here, and some slight electronic backdrop hinted at there, it seems as though the orchestration is also testing the waters, albeit slightly. As stated previously - this is a Children 18:3 album through and through - adhering to all that entails. But there are pop-rock elements, talky bits, melodious anthems, and so many other small steps in different musical directions that the very nature of the band's signature aura is changed. Thankfully, it's for the better.

"Why Are You Afraid Of The Dark?" is perhaps the most evident example of the divergence On The Run achieves. From the driving (and almost tediously repeated) chorus, to its overlain whispered verse, to its cameo from Blindside frontman Christian Lindskog, to its amazing and brief bridge ("When I can't see / Lead me / Almighty"), the song never stalls, maintaining its breakneck clip while still incorporating such separate and entwined pieces. It is so easily missed upon first listen-- the variety of style and substance --but it's there from the outset. In just under 40 minutes of total run-time, once again Children 18:3 never allow their songs to wear out a welcome, with each ending as fierce and abruptly as the next begins. "All In Your Head" is simply three and a half minutes of pulsing, growling rock n roll in its most unruly bent, while "Jenny" is simply three and a half minutes of aggravated pop-punk at its most classic. The sum of On The Run is the progression. This is an example of how to explore unmapped territory as a band without losing its identity. The foundation is laid - and obvious - but the layers of the 'new' accentuate the strengths of the 'old,' rather than abandon them entirely.

In the minds of many a rock fan, Children 18:3 is one of the more consistently excellent bands in the field, and with their outstanding self-titled debut and the also-impressive Rain's 'A Comin' behind them, the stakes have risen to an all-time high. Making minimal, but nonetheless noticeable, changes along the way, the Hostetter siblings exercise their accomplished form once again for On the Run, winning a self-sustaining hat-trick as a result. Tracks such as "Bandits," "What About Justice?", "Holding On," and "Nowhere To Run" are probably the least surprising inclusions here, but every song on the album serves a distinct purpose without exhausting their grand proportions. "We'll Never Say Goodbye," "Always On the Run," and "I Tried To Do the Right Thing" showcase the best that David and Lee Marie's vocal harmonies have ever been, and uncompromising face-melting is never in short supply throughout the project, either, whether its the ambitiously epic "Jenny," the concert hall-wrecker "All In Your Head," or Blindside's Christian Lindskog seamlessly featured on "Why Are You Afraid of the Dark?". While On the Run is a triumph that never overstays its welcome, the real test for David, Lee Marie, and Seth will be their ability to stretch themselves creatively in the future, as listeners still have yet to hear the siblings very far outside their musical comfort zones. But regardless, Children 18:3 are three for three with one of 2012's better rock efforts, and it still stands that no one else really brings their trademark sound to the table like this trio, remaining a Tooth & Nail distinctive in the process. - Roger Gelwicks, 6/17/12