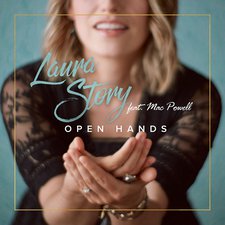 
Worship music as a genre has the uncanny tendency of producing one trick ponies. With well-beloved songs like "Blessings" and "I Can Just Be Me" Laura Story could easily take the road more traveled and rest on the laurels of her anecdotal style with each new release. Instead, Story abandons the homey storytelling she is known for and dives deeply into anthemic pop in her latest release, Open Hands. Though the album ultimately has more misses than hits, the fact that Story is willing to step outside her comfort zone and display legitimate progression as an artist provides fans with enough of a reason to give this a listen.

Admittedly, the lack of storytelling does take away from one of her more definitive traits, but the newfound pop style that Story employs syncs perfectly with the clear-cut tone of her voice. This fit is likely thanks to the group of producers at Fair Trade Services, who have developed Story's vocal abilities ever since 2013's God of Every Story and 2015's refreshing Christmas album, God with Us. Each of the songs on Open Hands boasts a mid-tempo cadence in support of Story's voice, but this factor also contributes to an overwhelming feeling of sameness that is consistent throughout the tracklist. Another noticeable production decision is that Story's vocals are curiously less bright and pronounced than on previous efforts, which makes for easier listening, however, the amount of reverb and synths become tiring by the midpoint of the album.

The biggest critique of Open Hands is a problem that persists throughout worship music in general: the only two moods that persist are triumph and contemplation. Certainly these frames of mind are worth exploring in depth, but when most other worship artists only work within these limitations, it makes this album feel like there is nothing new being offered to listeners. This often confines song structures as well--triumph is represented by minimal verses and grand choruses, while contemplative songs remain at the same dynamic throughout the entire runtime.

Additionally, the two songs that encapsulate these moods best, "Death Was Arrested" and "Whisper," respectively, overshadow the rest of the songs in their unique effectiveness. "Death Was Arrested" relies on a rhythmic swing that immediately distinguishes itself from the other tunes as well as an exciting build to a final chorus in which Story pushes her vocal limits to emotional success. This song also features the most poetic lyrics of the album, with lines like "Ash was redeemed, only beauty remains / My orphan heart is given a name" sprinkled throughout each verse. "Whisper" provides a sharp contrast to the energetic joy of "Death Was Arrested" by utilizing the widest range of instrumentation. In addition to a synth/guitar/drum intro that is befitting of the title, there is an acoustic chorus, interesting keys fills, and a pensive strings outro. This is definitely the musical peak of Open Hands.

There are a number of potentially compelling musical ideas amongst these tunes, but they often get squashed by the rest of the mix and the simplicity of each song's structure. There is a percussive acoustic guitar effect on "For The Love Of My King," but it is buried underneath the vocals and piano. Similarly, the synth part on "Whisper" is invitingly ambiguous, but it gets pushed to the background once the verses start. This makes most of the songs feel more layered, as long as fans dig deep and listen intently.

Lyrically, Story chooses to work within a lot of the tried and true cliches of worship music. This often results in predictable rhymes, as in the chorus of "Give You Faith" ("I wanna give you faith, I wanna leave you hope / That you would know a love that never lets you go"), but songs like the title track spotlight poignant and catchy lines with plenty of depth: "Take it all 'til all I have is open hands." The remodeled hymns also work exceptionally well by breathing new life into church classics. The excitement of opener "Awake My Soul (1000 Tongues)" makes the lyrics of the hymn in the verses underscore Story's chorus of, "Awake my soul to sing / The glories of my God and King / Arise and praise the one / Worthy of the songs of 1000 tongues."

Despite remaining in a repetitive pop design for all 11 songs, there are a variety of production elements that serve as nice touches that fit the message of the song. Whether it's the collective claps of "Awake My Soul (1000 Tongues)" or the use of a marching snare drum on "You Came Running," the thoughtfulness and craft of these decisions comes through clearly. The most notable detail comes on the most story-like song of the bunch, "Give You Faith." The baby chatter that comes and goes drives home the narrative of a parent speaking of their desires for their child. Moments like these make each song a little more heartfelt.

Laura Story's exploration of the pop genre makes for a fun collection of tunes, though there is not much in the way of expanding into new musical horizons. An abundance of anthems dilutes the potential of each song, making the tracklist feel mundane by the final third of the album. Still, the creative risks that are taken are admirable, and the little touches on each song will likely keep fans singing in agreeance with Story's desire to praise God with open hands.