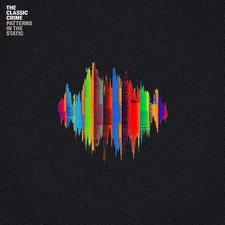 The Classic Crime
Patterns In The Static


Patterns In The Static, by veteran band The Classic Crime is a Jekyll & Hyde of an album. Originally this was bothersome, an irritant that got under this reviewer's skin. However, the musical catchiness kept begging for multiple listens, which reveal that the dichotomy is deliberate. Described by lead singer Matt McDonald as an album of two halves, the first half focuses on the more nostalgia-drenched daytime, and the second half takes on the many antagonists of the night. All of this is played out expertly using musical tone and lyrical messages that start lighter, and then slowly slide toward the darker shades of nighttime by the end of the record. There is a journey in search of hope being conveyed that begins on a sunnier note, takes us through tormented twists and turns, and finally leaves listeners with an open-ended conclusion, much like 2017's weary How To Be Human.

Musically, fans may be taken aback that this is the most pop of their typical alt-rock albums yet, though newer listeners will likely not have this problem of expectation. Here TCC leans fully into a shinier, and very accessible modern aesthetic, with songs "Highlights" and "Take A Moment" serving as the biggest examples of this glossier direction. Admittedly, this could be jarring and will take getting used to for longtime listeners. All is not lost, though, for those looking for some edge, as there are still flashes of angsty punk-driven riffs scattered throughout, like the bass-heavy "Destroy Create" and the vocal-shredding "Cold Loud Dark." Just be aware that this is primarily not the heavier Classic Crime of Albatross or The Silver Cord. Most of these musical arrangements are lush and inviting, drawing you in to take a closer look at the lyrics.

The first six songs major on freedom, remembering the good times of youth, and the simple encouragement to share your love with those you love. It's pretty straightforward, though it would be a mistake to slough them off as weak or unimportant, and certainly shouldn't be skipped. After the table is set, there is a turn on the title track where McDonald and company speak of "patterns in the static/noises in my attic/voices in my head keep me awake/I'm on the brink of madness/I can't help but laugh at this/oh what a way/oh what a way to learn from my mistakes." There is a desperate desire for hope being voiced, and he isn't finding it in self-medication or self-condemnation of past mistakes. "Destroy Create" struggles to fight off believing the lie in the form of the question, "why do I always have to destroy to create?" Further driving home this back and forth, the background vocals play the part of the antagonist, mocking the struggle as they smugly echo in parenthesis, "backstage in the mirror/(oh, I bet you are!)/caught up in stories about how my former glory is lost/and how I used to be better/(you were never good!)"

Indeed, without the tiniest glimmers of joy that breakthrough from time to time, ("Highlights," "Summer Of 92" and the baptism metaphor of "The Water's Edge"), this album could have been a truly bleak affair. This is the biggest thing holding this record, and honestly the band, back from greater heights. One certainly cannot fault them for their forthrightness, but these are many of the same life issues chronicled from their debut album, Albatross, forward. If you have come to care about this band, you may be heartbroken to hear of the continued struggles of principal songwriter and lead singer Matt McDonald. He sounds tormented, living the truth of Proverbs 13:12 in real-time. He speaks of drinking to be able to sleep, and being taunted by the lies of the Enemy again and again. One encouraging thing of note is that the harsh profanity of their previous album is in the rearview of the band's songwriting this time around. Though the authenticity the band is known for is still in full effect, it is refreshing that they sought other ways to communicate their frustration this time around.

Ultimately, this reviewer is eager for the band to have something to look forward to in the future rather than hanging out exclusively in the past/present. That true hope can only be found in Christ, and although his relationship to Christian culture may be dead or dying, one certainly hopes he doesn't throw the proverbial baby out with the bathwater. However, all that aside, there is plenty to grab hold of and return to often, like the album's biggest highlights "Miles And Miles," "Take The Moment, "P.I.T.S." and the ending trio of songs that work in tandem to bring the album to a familiarly epic and ambiguous close. All in all, Patterns In The Static is another record of wrestling with the deeper questions of life and a good addition to The Classic Crime catalog.