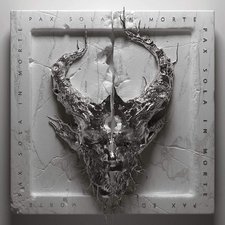 
Demon Hunter has quite a history under their belt with almost 20 years and 10 albums (including this one and War). They appeal to listeners who don't want constant rough vocals integrated in metal, even though Demon Hunter does have its moments where screaming / growly vocals are prevalent in some songs and even more so in releases prior to Extremist. This time, Demon Hunter surprised many fans by introducing the concept of releasing 2 albums (War and Peace) on the same day and date, with 20 total new songs (22 if you purchase the Special Edition versions). In this review, Peace will be the main emphasis.

Opening the album, "More than Bones" kicks things off nicely as it is a fairly well paced tune that radiates with just the right amount of punch you would expect from a rock anthem. It focuses on God's promise (salvation) and how one will continue their life after death: "more than bones / you'll never be alone / when I leave you/ I leave you more than bones." From here, the album ventures into less memorable songs, "I Don't Believe You" and "Loneliness." The songs are decent, however, there isn't really much variation like we've seen in past DH songs. When I'm listening to "Loneliness," I keep anticipating that some change up in the vocals (wailing, screaming) will take place, or even a breakdown. However, it is nice during part of the song where the music subsides briefly and Ryan's vocals are the focal point. The title track, "Peace," released earlier as a preview single, is a good example of a typical but great Demon Hunter composition. It flows nicely, has a very catchy chorus as well as a nice bridge, and is easily one of the highlights on the album.

Demon Hunter deserves credit on trying new things on this release, such as "When the Devil Come," which resonates a western-like theme and somehow they make it work using their own design. I have to admit that I can't seem to get this song's chorus out of my head after listening to this release. "Two Ways" is more of medium level hard rock tune than can sometimes lean more towards metal. "Rescue Myself" is a little reminiscent of NYVES (Ryan's other project), and that makes it a distinctive track filled with synthesizers. The album closes with perhaps one of Demon Hunter's best ballads, "Fear is Not My Guide" that encapsulates a sound familiar with Queenryche's 1991 hit, "Silent Lucidity."

If you only had the option to buy one of Demon Hunter's new albums, I would recommend War as it is a more balanced (musically) and memorable release. (For a look at the other release, War, please click here.) Peace befits more when it is included with War as part of a set. Peace has its flaws, nonetheless, the album still has some stellar tunes like "More Than Bones," "Peace," "When the Devil Come" and "Fear is Not My Guide." All in All, this is not Demon Hunter's best, but it is a good album that should please most Demon Hunter and hard rock fans, and I feel it's worth a purchase along with War.

War and Peace are obviously two different albums, and I think the question of which is better is not an unfair one. Although I personally think War is the stronger of the two, Peace is a strong release in its own right. My prior experiences with a full-album of Ryan Clark only singing clean (Anxiety by NYVES and Uppers by Low & Behold) weren't the best, but admittedly, it feels more natural in this hard rock setting as opposed to the electronic and shoegaze settings of those other bands. And some of these songs even have glimpses of their brand of metal, because what DH album would be complete without some genre-blending? My top picks here are "More Than Bones," "Peace," "When The Devil Comes," and "Two Ways." It's a unique addition to the Demon Hunter catalogue, but a highly enjoyable one, as well. - 2/27/19 Scott Fryberger

Unlike the simultaneously-released album War, Demon Hunter's Peace is decidedly mellower, with vocalist Ryan Clark singing rather than screaming through most of it. A lot of the songs run together, though tracks like "When the Devil Come" and "Fear is Not My Guide" stand above the rest. As always, Demon Hunter delivers well-crafted songs, but most of these aren't memorable enough to keep coming back to. - 2/27/19 Andie Hardee

With War allowing Demon Hunter to give an outlet of their heavier roots, Peace is likewise an outlet for the band to put out material that tickles their rock anthem and balladry bone. And they even were able to experiment with their sound in ways that would be hard to integrate into their metalcore stylings, such as the flamenco hints present in When The Devil Come or the Guardian-like 80s arena rock woven into I Dont Believe You. But more frequent than these moments are the more straightforward and singable rock tracks like the driving opener More Than Bones, the highly melodic chorus of Loneliness, or the haunting closer Fear Is Not My Guide. Many of these songs are downright catchy and bound to become fan favorites, and while War may be the stronger record of the two, Peace cant be ignored. - 3/2/19 Mark Rice