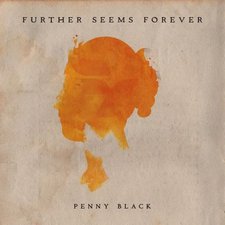 Like so many other bands, Further Seems Forever started out of the remains of another band's breakup. When hardcore band Strongarm broke up, Chris Carrabba was recruited, a change in sound and name occurred, and a Spinal Tap-esque scenario began with lead singers. After three albums and three singers, the group called it quits in 2006. Then in 2010, the unthinkable happened... Chris Carrabba and the band reunited for a show. Two long years later proved to be a worthwhile wait as Carrabba's sophomore FSF album, Penny Black, released 11 years after the group's debut.

The album opener, "So Cold," is one of many rockers on the album and stands out as one of the best. In fact, Penny Black as a whole, is more of a rock record than The Moon is Down. While most of the album avoids overtly emo tendencies, Chris's emotional screams can still be felt full-boar on tracks like "Rescue Trained." A couple of other strong showings from this record are "Way Down" and "Staring Down the Sun."

The only misstep, so to say, is in "A System of Symmetry." It's not that the song is particularly bad, but its slightly electronic sound doesn't blend as well with the other tracks. One of the album's slowest songs just seems to take away from the overall cohesion of the whole. The title track is next up and the guitars within it scream classic FSF. It's actually quite fitting for "Penny Black" to also be the title of the record. "On the Outside" continues the old school feel, while "Engines" picks the rocking pace back up. "Rusted Machines" and "Stem the Loss" serve as nice songs as well, but more than anything lead to the beautiful closer, "Janie." The song is a slow acoustic ballad and may sound a touch more like Carrabba's post-FSF endeavor, Dashboard Confessional, than Further Seems Forever. The closer is the longest track on the record and really leaves the listener with a nice ending and the thought of satisfaction with their listening experience.

Penny Black is nothing short of a triumphant return for Chris Carrabba to Further Seems Forever. Although an enjoyable band to listen to, their history was rather sad to watch unfold. It just feels right that FSF is back with Carrabba at the helm. They gave fans a lot of heartache and uncertain times, but all of that has led up the band's best album to date. Do yourself a favor and give this somewhat overlooked album from 2012 a listen.