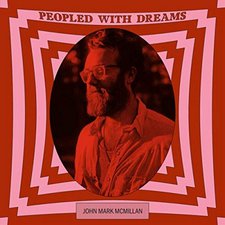 
John Mark McMillans brand of poetic alternative/rock is celebrating its eighteenth year of existence in 2020. He has chosen to celebrate in style, with the release of his eighth album titled, Peopled With Dreams. Though most listeners wouldnt have tuned their ears to his sound (this reviewer included) before the world-wide hit How He Loves, McMillan has been at this for a long time before and since. On his previous album, Mercury & Lightning, we found John Mark wrestling with deconstruction and reconstruction of his faith amidst great difficulty finishing the album. The struggle produced an increasingly rare gem, as McMillan took listeners on a creative journey of reassurance that among all the treasures or gods of this earth, only one is truly worthy of our worship. While Peopled With Dreams isnt quite the caliber of its predecessor, it is still deserving of high marks in its own right.

Wasting no time in establishing a thesis statement or hook, Christ Jesus does both expertly in under two and a half minutes. A gospel-choir and hand claps anchor the track as he sings the question about humankind's approach to life, "Are we asleep inside the miracle of it all? While Juggernaut and Bright Abyss skew toward more common McMillan sounds, Cousin John is the albums first risk, as John Mark sings from the perspective of Jesus talking to John the Baptist as he is questioning if he is the one from prison. The sonics seem to be purposely off-kilter with a prominent bass line, trumpets, and a crisp drumbeat that can only be described as odd. It certainly grabs your attention as we hear lines like, In your cold room/do you suffer/are you tied up in knots/do you wait or hope for another/am I all that you've got/cousin John/keep your head about you/cousin John/keep your head up/keep your head on." At first, it would appear an off-putting and flippant statement, but upon further reflection, I think that McMillan is going for a double meaning. Perhaps we need to look no further than Luke 7:23 for our answer. To this reviewer's ears, the most musically accessible portion of the album begins with the piano-based, and beautifully melodious Pilgrim, the simple hook-laden Everything New," huge-sounding "Hammering Heart," and best song of the album, The Road, The Rocks, And The Weeds. The other big musical leap comes from the somewhat ominous Hammering Heart. The ending minute-plus of the song is instrumental and ridiculously grand in scale; think epic blockbuster movie soundtrack. Lastly, worth noting is the resounding closer, Ancient And Brave, which finishes the album off with great conviction. While the rest of the album is solid, some of your enjoyment of it will be predicated on your comfort level with 80's era music. "God Is Young," "Unbroken Horses," and "Juggernaut" are the biggest example of this, though all feature typically thought-provoking lines worthy of examination regardless of the sonic palate.

Long known and loved for his lyrical turn of phrase, John Mark continues to drop poetic, thought-provoking lines in nearly every song. Just a few examples on the highest of highlights come from his description of life in Juggernaut, as he observes, blossoms dress the trees/spring without permission rages on again/the ruckus that she brings/a juggernaut stimulating merciless/in a show of power. Additionally, lines from The Road, The Rocks, And The Weeds like, when Ive got no answers/for hurt knees or cancers/But a Savior who suffers them with me/singing goodbye Olympus/the heart of my Maker/is spread out on the road, the rocks, and the weeds, also stand out. Lastly of note is the book of Job-inspired answer of God to mankinds question of, where is God at a time like this?. Forcefully and resolutely we are reminded of Gods truly awesome power with the lines, You cut the mountains with volcanic rage; stone and ash/You lit the firmament ablaze/You pulled the waters back/You drank the mortal cup/to feel the blast of senseless acts/You blotted out the blood of war/with blood upon Your back. Refreshingly, John Mark shows no sign of leaving an upper echelon of songwriters unafraid to make their listeners think a little deeper than the surface.

John Mark McMillan has now had the attention of audiences everywhere for well over a decade, and he continues to write well-crafted songs. Peopled With Dreams is another solid album to add to an excellent discography, and is highly deserving of multiple focused listens. Here we find McMillan walking confidently in his faith, pointing all believers to the heart of a God who is with us, and who is all-powerful. If you have somehow missed McMillans previous works, they are all worth checking out from the beginning forward. For those looking for just a few cream-of-the-crop songs from this one, be sure to listen to Pilgrim, Everything New, The Road, The Rocks, And The Weeds, and Ancient And Brave.

John Mark McMillan took his music to the next level in 2017 with Mercury & Lightning, which has firmly taken the number one spot in my heart out of all of his studio albums. So naturally, the idea of a new album had me excited. Peopled With Dreams is more in line with Mercury than his previous, rock-based work, so fans who want more Borderlands or The Medicine may be out of luck, but Peopled is still fabulous work from McMillan. The album seems to have a lot of Sgt. Peppers / Magical Mystery Tour influence added into what the previous album established, with unique instrumentation, wonderful melodies, and the occasional tongue-in-cheek lyricism (looking at you, Cousin John). The songs that hit big with me this time around are Juggernaut, Bright Abyss, Pilgrim, Everything New, and the absolutely beautiful The Road, the Rocks, and the Weeds. Peopled With Dreams is a terrific follow-up for McMillan and is an album that will get many repeat listens out of me. - Review date: 2/13/20, Scott Fryberger of Jesusfreakhideout.com