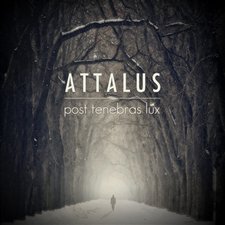 
Post Tenebras Lux is a Latin phrase that is translated, "after darkness, light." This being North Carolina band Attalus' first LP, the title is fitting because it finds the band stepping into the proverbial spotlight for the first time. Now, the duality of darkness and light is not exactly a new lyrical theme to write about in Christian music, or music in general for that matter, but Attalus does so in a way that makes it feel like a fresh new topic.

The duality of Post Tenebras Lux is apparent right from the get-go with "Night," opening with haunting keys but quickly transitioning into a post-metal barrage of awe-inspiring power chords, rampant drums, and violently passionate singing (and screaming). Toning things down, the indie rock-centric "The Problem of Pain" pulls no punches lyrically in a conversation with God: "The blood, the tears, the sweat / Why does it feel so wrong? / Disaster, pain, and death / Oh God, where have You gone?" The title track is next, boasting a beautiful piano section, unique guitar work, and a catchy melody that repeats throughout. Possibly one of the strongest songs on the album, "Faith and Reason," has some pop punk leanings with equally deep and clever lyrics reminiscent of Relient K: "Faith without facts is dead religion/Facts without faith is science fiction." "Shadows of Doubt" is one of the more straightforward rock songs on the album, but still consistently impresses with technical guitar riffs, shifting rhythms, and soaring melodies.

Maybe the weakest song on the album, musically, "When I Lose My Way" contains top-notch but mildly repetitive instrumentation and melody; however, the conversational lyrics between God and man keep the song engaging with God triumphantly replying: "I wasn't scared to bear your hell, so I think I'll bear your doubts just fine." Returning to the post-metal, indie rock formula, "One Defining Spark" utilizes background screams and a prominent bassline to convey it's dichotomous dark and bright atmosphere. "At the Rubicon" is a definitive highlight, with mesmerizing keys and strings that pair wonderfully with the harmonizing vocals and rich metaphors. The best example of this album's use of duality is the penultimate track, "A Country Road in Two Seasons," which uses a creatively diverse musical backdrop to narrate the journey of the everyman coming out of darkness ("As I make my way through this God-forsaken land/Watching devils laugh and drunkards clap their hands") and into the Lord's light ("As I make my way through this God-beloved land/Watching angels laugh and children clap their hands"). Then "Let There Be Light" abruptly ends the album with a refrain of the words "Let there be light," followed by a short instrumental.

Aside from a few songs being a bit long and repetitive, there is so much to appreciate on Post Tenebras Lux. This is a prime example of what Christian rock could be. If you're spiritually and/or musically dry, this album has more than enough substance to whet your appetite for a while. Fans of alt-rock bands such as Emery, Thrice, and The Classic Crime will want to check this out for sure.