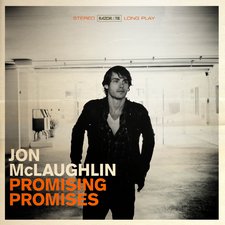 It's safe to say Jon McLaughlin has had a pretty accomplished career so far. He has appeared in a Disney movie, toured with some high-end mainstream acts, and performed in front of 32 million at the Oscars. The singer/songwriter has been around since 2003, steadily releasing records throughout the years. His latest, Promising Promises, is exactly what the first word in the title says: Promising.

Promising Promises begins with the title track, and it's easy to see that the album will be piano driven. The song is extremely catchy and also shows off the vocals of McLaughlin. With some added guitars and soaring vocals, it sets the stage for the rest of the album. "You Never Know" follows and slows down the pace from the beginning track. The song keeps the piano while adding in some hand claps and guitar. There's a little bit of a southern twang to the track, which actually fits well into the grand scheme.

For the next track, enter Sara Bareilles. Bareilles, one of the judges from the recently cancelled The Sing-Off (R.I.P.), makes a guest appearance on "Summer is Over." The song is rather somber, talking about a break-up between a couple who have been together for quite some time. The different vocal tones work so well together that it's like it's meant to be. (Side project, anyone?)

"What I Want," the fifth song, is upbeat, poppy, and explores the topic of living life freely. "I'll Follow You" will be a song that is played at countless weddings, and " My Girl Tonight" once again talks about the opposite gender. Despite the common topic of the last two, these three songs are all brilliant showcases of McLaughlin's sheer and raw talent through instruments and vocals.

If you're looking for a blatant God-centered message throughout the record, it's just not that obvious. But if you're looking for good, pure, and quality music from an up-and-coming musician, I highly suggest picking this up and giving it a listen. If you don't enjoy it the first time, give it another shot. This combined effort of guitar, piano, and pop will grow on you.

After commercial and critical success on Island Records, singer/songwriter Jon McLaughlin decided to take his talents back to the independent ranks, resulting in the intricate and deeply personal Forever If Ever. With his musical authenticity in full check, he has signed with the artist-friendly Razor & Tie to let his next venture loose, and while McLaughlin retains absolute creative control, he continues to pour out expertly accomplished and soulful musings and melodies with Promising Promises. After the convincing openers of the title track and "You Never Know," highlights include masterful duets with Sara Bareilles and The Voice's Xenia Martinez found in "Summer Is Over" and "Maybe It's Over," respectively, and the solidly composed and humble piano ballad "My Girl Tonight." Lyrical profundity is never in short supply for McLaughlin's methods, even if constant optimism isn't. There isn't a bad apple in the bunch of Promising Promises, which is a real feat by itself, but on a conceptual front, the album's whole does feel a little on the long-winded side as an ode to love and loss. While it would be an insult to dub any track underperformed or second-rate, McLaughlin borders on exhausting much of the same songwriting themes by this point in his career to the point where much of the album regretfully blurs together. Every song can hold its own while isolated, but the album doesn't bode many surprises when heard in one straight shot. Still, fans of McLaughlin's work will be more than thrilled with his Promising Promises, well assured of his frequently documented and well-exercised musical genius. - Review date: 5/20/12, Roger Gelwicks of Jesusfreakhideout.com