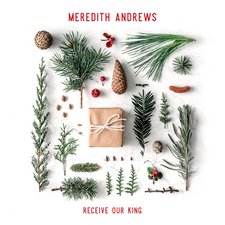 
Over the course of the last ten years, Meredith Andrews has carved out something of a niche for herself thanks to a burgeoning back catalog of ear-pleasing, impeccably-polished tunes forged, for the most part, upon the now-familiar ground at the intersection of radio-friendly worship music and laid-back adult contemporary pop. To be sure, if one cared to make such a comparison, it could be said that her albums might best be described as the aural equivalent of comfort food. Given this uplifting, cozy aesthetic that permeates the better portion of her songs, the eventual unveiling of her first full-length Christmas effort must have seemed almost a given to those most acquainted with her former work.

At the topmost level, Receive Our King features a nice balance of Christmas classics, original compositions and cover versions of more recent holiday-themed tracks. Charles Wesley's venerable 1744 advent hymn, "Come Thou Long Expected Jesus," is constructed around subdued verses alternating with towering choruses, the sum total of which combine to create an item of understated elegance and beauty. The great pop song at the heart of "Behold the Savior," which first appeared in a different version on Andrews' 2013 EP of the same name, is made that much more triumphant by the singer's consummate balance of passion and restraint. And the remake of "Labor of Love," which first saw the light of day on Andrew Peterson's landmark 2004 Behold the Lamb of God project, stands shoulder to shoulder with the original, which is very high praise indeed.

All of that said, if Andrews possesses any singular Achilles heel, it would have to be the way in the material on her releases can tend to vary too little from one cut to the next, never straying too far afield from the relaxed, easy listening pop base upon which they are built. But while she continues to stay mostly within those same familiar confines this time out, there are one or two stylistic left turns tossed in for good measure, and, to their credit, the album winds up being that much better because of them. "Hark! The Herald Angels Sing" is infused with a blues-meets-country texture that offers a somewhat new take on the venerable chestnut. The ever-so-slight Coldplay-esque inclinations of "Glory in the Highest" play out in equally engaging fashion. And the 1930s holiday spiritual, "Sweet Little Jesus Boy," is run through just enough electronic effects to lend it a sort of otherworldly effect, which, in hindsight, seems only appropriate given its subject matter.

The back half of the record, in particular, does begin to bog down into by-the-book praise-oriented pop. And one or two of the tracks have a certain listless feel to them which works to dampen much of the intimacy and immediacy they might otherwise have possessed. In all fairness, lapses such as these are, by and large, more the exception than the rule. And "It Came upon a Midnight Clear" and "Sweet Little Jesus Boy," which place Andrews' crystalline vocals against a lone acoustic guitar and sparsely-placed keyboard textures, go a long way toward counterbalancing the less impressive material. To be sure, the average listener probably wouldn't have to listen to these two numbers too many times before they found themselves pining for a follow-on effort comprised entirely of such songs.

Devotees who have enjoyed Andrews' offerings to date are sure to find her latest release to their liking, given that it offers up an ample supply of that which first made them members of her fan base in the first place. On the other hand, those who have already written off the entirety of her discography as too laid back and/or homogenous for their tastes aren't likely to be converted by her most recent outing since the lion's share of it follows the template laid out by her previous records. For listeners who don't fall squarely into either of those camps, however, Receive Your King contains just enough truly unique and transcendent moments to suggest that Andrews is just beginning to come into her own and that her next album may well be her defining moment.