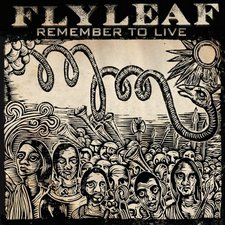 Flyleaf's sophomore album, Memento Mori, was their first album in four years. That makes it strange that a year later the band has already released another project, the Remember To Live EP. It may seem a little strange, perhaps, but no less sweet. According to the band, Remember To Live (translated "memento vivere") is a seven-song collection comprised of new songs, and older tracks that fans have urged the group to release.

If any Flyleaf fans are expecting the EP to be a rocking project, let me begin by saying the EP is surprisingly soft. The "Violent Love" version of "Justice & Mercy" lacks all of the guitars and screaming vocals of the original (previously released on their 2007 Much Like Falling EP), but beautifully highlights Lacey Mosley's terrific vocals. The moody beginning of "Okay" indicates an aggressive rock breakout, but the short song also stays very mellow. The most ambitious track on the EP is "Amy Says," which features a light rock tune with a slight alternative edge. Lacey's moving voice raises the emotion level of the acoustic "Dear My Closest Friend" to soaring heights. Although "Light In Your Eyes" starts with a simple acoustic guitar, the fine, up-tempo bridge is what ultimately makes the song an easy highlight. The atmospheric "Believe In Dreams" also shines because of the combination of Mosley's vocals, and the effortlessly, seamless melody. The only real low spot on the EP is the remix of "Arise." The Ben Moody Mix takes an energetic rock song, and fails to add anything more than a slightly better beat to the original.

It's surprising and extremely commendable that a band whose sophomore project debuted at number eight on the Billboard Top 200 would not shy away from using undeniable references to God routinely. The Remember To Live EP follows in step with its predecessors on several occasions. The chorus on "Okay" states "It's too important for us to forget/We'll unify our thoughts/God will hear and save/God will hear and save us" while also admitting that just being 'okay' isn't enough. In the midst of difficulty, the band sings, "When all we wanted was love/We got cut up and burned/But there's a light in your eyes/And it tells me/That God is on our side" in the hopeful "Light In Your Eyes. " The optimism in "Believe In Dreams" and the regret in "Dear My Closest Friend" are other themes that are more than worth thinking about.

Even though I wasn't thrilled with the entirety of Memento Mori, it's difficult to find fault with the Remember To Live EP. Yes, fans of Flyleaf's screaming rock music will be disappointed that the EP didn't contain more upbeat songs or high energy vocals. However, those fans who decide to stick with the EP with be rewarded with Lacey's fine voice driving the soft, artistic melodies, and thoughtful, spiritually minded lyrics. This EP is a near perfect release to fill the gap between projects.

Flyleaf returns thirteen months after their last full-length album, Memento Mori, with an EP showing off their softer side. The Remember to Live EP features a heavy dose of acoustic guitar work in the nearly 24 minute release. Fans that got the iTunes Exclusive Much Like Falling EP will recognize the opening track, "Justice and Mercy." Lacey and the band take a more mellow approach with the "Violent Love Version," making it an acoustic guitar ballad that really compliments the song. The next five tracks are rare and previously unreleased songs from the past; some of which even date back to the days when the band went by the name Passerby. Songs like "Okay" capture the essence of Flyleaf while remaining acoustic, yet "Amy Says" is more of a softer alternative rock song. In fact, "Amy Says" and the Ben Moody (of Evanescence fame or infamy) remixed "Arise" are the only two tracks that feature electric guitars. This EP will prove that Flyleaf, more directly Lacey Sturm, is not a one trick pony. The band pulls off these slower acoustic driven tracks with ease. "Dear My Closest Friend" will make you fall in love with the band all over again as it is probably the most beautiful song the group has recorded. The biggest downfall to the EP itself is that it is an EP. It would have been great to see them put together another four or five tracks for a rarities/B-Sides album. Do not pass this EP up as filler; you are going to want to hear this one over and over again. - Michael Weaver