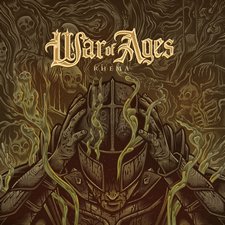 
The distinction between an album and an EP seems to have blurred slightly over the years. Initially, the distinction came from a hardware limitation of vinyl records that limited EPs to 25 minutes, but with the current predominance of streaming services, one finds lengthy EPs and shorter full-length albums, with the difference sometimes falling to construction rather than length. Despite the more widespread ambiguity, War of Ages' latest release is definitely an EP -- four songs totaling just over 16 minutes, with more focus given to the individual tracks than their interaction. While a brief project, Rhema finds the band at their finest and most polished.

One of the benefits of releasing music as an EP is that it allows musicians to focus on the strength of the individual tracks. War of Ages uses this tactic well, producing four individually strong songs that still sound excellent together. "Sleight of Hand" leads the EP off nicely from an electronics-infused introduction into a pummeling barrage of technical riffs, blast beats, and growled vocals. "Pyrite" shows the band at their strongest, including some well-placed breakdowns along with one of the best guitar solos they've created yet. "Unspoken" brings some clean guitars into the mix, while lead single "No Altars" closes the EP out with a track tailor-made for live shows.

Apart from the strength of the individual tracks, though, there isn't a lot to be said about this project. Besides the amount of compression in the production, there isn't much to criticize: there isn't a weak track to be found, or even a weak section in any of these tracks. But neither does the project have the staying power of a full-length; while it's composed of four very strong songs, it ends up coming off as four very strong songs. But even if it lands as nothing more than the sum of its parts, those parts are well worth a listen.