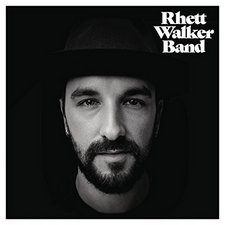 
In the wake of Third Day's retirement, popular CCM is in need of a Southern rock act and Rhett Walker Band can help fill that void. Walker's vocals are a smoother version of Mac Powell's, and his songs contain foot-stomping beats, rocking guitars, and simple but bold statements of faith. After a four year hiatus, Rhett Walker and company are back with Rhett Walker Band EP, a collection of six Southern-fried songs poised to catch the ears of Third Day fans.

The opening track, "Say Hello," is a perfect example of this. With its catchy hooks, infectious beat, and lyrics referencing a tent revival, this could have easily been on Third Day's last album. Revival. "Peace in the Family" cuts most of the live band for a more Southern pop/rock feel that encourages unity among believers with the constant refrain of "One love/Same blood/Peace in the family." The rock 'n roll picks up in full swing for "Love Done," sporting a growling riff and high energy that keeps the listener hooked to the end. "Murderer" taps into the bluesy "crime ballad" vein with a twist: Walker sings as those behind the murder of Christ and the chorus is dramatic all the way through: "I shouted, 'Crucify! Crucify!'/Now I cry, 'Mercy! Mercy!'" The epic feel builds through the song and a choir of backing vocals at the end adds a satisfyingly haunting aspect to the tune. "Like Your Father Does" slows the pace down with the obvious radio ballad, though it works as being a sentimental song from Walker to his child. The bridge is the catchiest part and elevates the track to being more than just filler or a standalone single. "Heavenly Home" rounds out the EP with an upbeat tune about struggling with authenticity in faith and longing for heaven.

However, while this EP is catchy, it fails to break any new ground. If you've listened to even a small amount of Southern rock or country, you've heard these chord progressions before. If you've listened to Christian versions in the genre, you've heard the lyrics before. And yet, in spite of all this, Rhett Walker Band EP shines brighter with every listen. Listeners eventually arrive at a point where they don't care anymore that they've heard certain aspects previously since the six songs here are strong in their own right. They're fun and fresh in a sea of EDM-tinged pop that recycles the same tropes over and over. Rhett Walker Band is also recycling tropes and running on tires others invented, but they do it well.

That brings us back to Third Day fans. If you are sad to see the veteran group hang up their instruments, Rhett Walker Band stands at the ready to fill the void. This EP shows the range of what they can do. All-out rockers mingle with radio ready ballads and bounce back and forth with a gleeful energy, much like Third Day could do. Pop rock fans in general can find something to enjoy here and, given enough time, other skeptics could be won over, too. Throw in a dash more creativity and whatever Rhett Walker Band does next will be worth checking out.