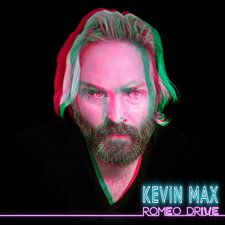 
Since his tenure in the platinum-selling trip dc Talk, Kevin Max has released some very impressive solo projects over the years (as well as serving as the lead singer of Audio Adrenaline for a brief period). While Michael Tait has been the one leaning more towards pop and TobyMac has been the one that is more commercial hip-hop (although many may not classify him in this category), Kevin Max has always been known as the artist with a more alt-rock style. Kevin has been bringing so many projects that it's remarkable he hasn't exhausted new ideas, and yet, he continues surprise the listener on this newest venture, Romeo Drive. As taken from Kevin Max's website, "ROMEO DRIVE is the conceptual tale of a rogue Cybernetic, who against all odds, sets out on a journey to understand the origins of the human soul. Set during the time period of future earth 2079, Romeo Drive must find allies in assisting it to find WWW (Wicked Witch of West), a global mechanism which can unlock the answers to the future & the mysteries of God."

The opening of the album, "2079," is reminiscent of the introduction of Tron Legacy, "The Grid" by Daft Punk, which was narrated by Jeff Bridges, as Kevin Max dictates the life of an end drive system (a likely representation of a lost soul) that reflects on the limitations of the surroundings on earth. Musically, the whole album gives a feeling that would be right at home with the original Tron movie from 1982, which gives it that synthesizer sound combined with an electronic and futuristic vibe which was very prevalent with bands like Devo and Joy Division. "R U A Spirit?" is easily the album's best track and delivers a very emotional tone. Although it's a short tune, it's a very effective song that evokes the questions of life's existence.

"Arms of Orion" and "Are Friends Electric" generate a New Wave sound. Being a Depeche Mode fan, it's nice to see an artist capture the sound they had with 1981's Speak & Spell before they escalated in popularity. It shouldn't come as a surprise that since Kevin Max is such an avid 80's music fan, it's as if this was a newly discovered album from the 80's vault. In addition to the tracks that take you back in time, Kevin Max also provides a nice cover of Joy Division's most famous single, "Love Will Tear Us Apart."

Romeo Drive has to be experienced as an entire album (minus the cover song) much like a movie or series, as all of the songs intertwine with each other. Kevin Max continues to impress the listener with well thought-out, imaginative, and poetic songs that explore fictional themes. It took a while for me to adjust to this album, but it really started to become like a new experience with each listen. There are many reasons to enjoy this album, especially if you like the music from the 80's with its electronic creativeness. This album could just as easily have been part of a soundtrack used for a science fiction film (ex. Ready Player One). One thing that needs to be stated is that it is highly recommended that one might want to purchase the album directly from Kevin Max's website. Through his site, you receive an exclusive cover song, "Ba Ba Ba Ba" (originally by the Seventy Sevens, from their 1984 All Fall Down album), which is actually a very good rendition and definitely makes the album feel more complete.

Depending on who you ask, Kevin Max is either a quirky, outside-the-box-thinking genius or an absolute, unqualified oddball. While there is undeniably ample evidence to support both viewpoints, the argument over just how to classify the eccentric Michigan native isn't likely to be laid to rest anytime soon. What is certain, however, is that, in the nearly two decades since the members of DC Talk called it a day (save for the occasional sea-based reunion), TobyMac and Michael Tait have slowly, but surely, inched closer and closer to the center of the proverbial radio dial while their former brother in arms has resolutely chosen to paint from a decidedly more eclectic palette.

Set six decades in the future and based around the tale of a cybernetic being intent on connecting with God, Romeo Drive seems destined only to add fuel to the debate over just how to categorize Max's art. Opening with the spacey spoken-word piece, "2079," and following with eight more cuts that sound as if they were pulled from the first A Flock of Seagulls album, the mesmerizing groove of "R U A Spirit," the palpable yearning of "Arms of Orion" (not the Prince tune), and the relentlessly funk-filled bass line that skillfully propels "Pretend to Dance (I'm Not a Mannequin)" ensure that each of those tracks stand solidly on their own merit, regardless of whether or not the listener who hears them happens to remember the glory days of the early-MTV era.

Its many attributes notwithstanding, the release still falls just short of recommended-purchase status. Songs like "The Listener" tend to meander melodically. The copious digital effects that embellish the covers of Tubeway Army's "Are Friends Electric?" and the defining Joy Division single, "Love Will Tear Us Apart," render them a good bit less engaging than their more stripped-back original counterparts. And the inclusion of not one, but two spoken-word numbers seems a bit much, even for a project like this one. Even with its shortcomings factored into the equation, though, the album still stands leaps and bounds above most contemporary Christian pop in terms of uniqueness and its creator's willingness to take the path less traveled. Neither his strongest nor most consistent showing to date, Romeo Drive is nevertheless yet another winning installment in Max's intriguing, unpredictable solo catalog. - Review date: 11/28/18, Bert Gangl of Jesusfreakhideout.com