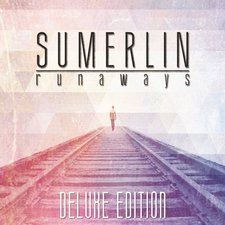 There are many reasons a band or label might re-release an album: to resurface lesser known material (TFK's Set It Off), to celebrate an album's anniversary (Jesus Freak), or even to put a new spin on a poorly received album (FF5's III / The Third). With Sumerlin's label debut, Runaways, it seems that DREAM Records wanted to give it a second chance for success. Retaining the original 12 alternative rock tracks, Runaways: Deluxe Edition adds five new poppier songs and an acoustic rendition of "Breaking Out," resulting in an uneven listen.

The lyrics for the first 12 songs are mostly straightforward with nothing profound to say. Songs like "Walking In the Dark" and "Breaking Out" walk the ambiguous line between God and girl with another two songs ("Here With You," "More Than A Memory") being exclusively about the latter. Other songs speak out against hypocrisy ("Counterfeit"), suicide ("Voices"), and complacency ("Speak-Up Speak-Out"). The rock-based tracks like "Heartbeat" and "Breaking Out" feature aggressive guitar riffs that are typical for the genre, but still enjoyable. The band's most impressive instrumentalist is the drummer who shows a lot of talent with his dynamic playing style and drum fills. Lead singer Dan DiGiovanni's passionate vocals fit with the sound the band is going for--however, when he hits some of the higher notes, some may find the vocals a little off-putting. Sadly, when Sumerlin drops their rock edge, the album feels especially ordinary. "More Than A Memory" assumes a dreary ambient sound, while the ballad, "You Always Were," and the power ballad, "As I Am," are too predictable.

The pop/rock track, "The Dreamers," marks a lyrical, stylistic and vocal change for the rest of the album. From here on out, the lyrics are slightly more spiritual, yet they somehow have even less to say than their predecessors. The exception is "Mercy On Us," which presents a well-articulated Gospel message: "We see the innocence that's been lost/ But you see the finished work of the cross," backed with a memorable chorus. The way DiGiovanni uses his voice is also different; he does not hit the unpleasant higher notes, but he also does not have as much passion in his voice. Coming out of left field, "All I Need," "#LiveLove," and "Mercy On Us" all contain a radio-friendly pop sound--again, the latter of which works the best. The only song to retain any semblance of alternative rock is "Out Of My Head" and even this one sounds like it does not belong. Closing out the album on a high note is the acoustic version of their hit single, "Breaking Out," with its simple arrangement.

Considering the different direction the band seems to be taking, an EP would have been a more appropriate avenue to release this new batch of songs. While this album may be enjoyed by many, there are too many other bands that pull off the alternative rock and pop genres better than this to warrant a recommendation. There are a couple standouts, like the urgent "Speak-Up, Speak-Out" and the newly recorded "Mercy On Us," but as it is, Runaways: Deluxe Edition is a decent but forgettable album that will likely get lost in the shuffle.

Sumerlin sounds a good bit like Anberlin. No, scratch that. Sumerlin sounds a whole lot like Anberlin. But, even though the glaring similarity might rightly be cause for most purists to dismiss the Runaways record out of hand, those who are able overlook the frequent borrowing of ideas will find that, underneath it all, the new album winds up being a fairly engaging proposition. Pop ballads like "As I Am" and "You Always Were" are easily as good as anything most listeners will hear on Christian radio, while bracing modern rock cuts such as "Heartbeat," "Breaking Out" and "Counterfeit" are arguably superior.

For the most part, the band foregoes specifically-spiritual language in favor of the romantically-themed wording of "More Than a Memory" ("Am I just a picture on your wall/ This can't be the end of us"), and the crossover-friendly positively-inclined sensibility of songs like "The Dreamers" ("We were not meant for this / Cause our lives are more than ordinary"). Of course, lyrics like this aren't exactly poetic or sublime, but as generic as they tend to be, many a listener will still find them refreshingly uplifting. Likewise, as instrumentally conventional as it is, the album's best moments are never less than thoroughly rousing - all of which adds up to make the Runaways re-release a sort of modest victory for its creators, but a victory nonetheless. - Review date: 3/3/15, Bert Gangl