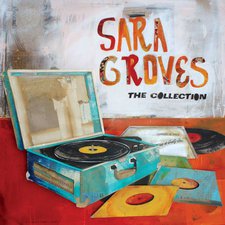 After 15 years of making beloved and critically acclaimed music, it's probably long overdue for a Sara Groves compilation album. Groves has chronicled her career on The Collection, a double album comprising 23 previously released songs and four new tracks.

Groves writes songs of honesty and depth, usually in an acoustic piano-driven folk setting. She is one of Christian music's premier songwriters, with quiet legions of fans gathered on the strength of personal and even convicting lyrics, lovely melodies, and an engaging voice, as opposed to massive radio airplay. This statistic explains her commercial career well: she's had four Billboard top ten albums, including a #1, but not a single song charting higher than #22. She's an album artist in a single-track-download world, suggesting consistency and care in all of her collections. Naturally, this makes it difficult to select songs for a "greatest hits" album.

Her choices give little attention to those charts. The #1 album, Tell Me What You Know, only has two songs on the compilation, and her highest charting song, "Less Like Scars," is left off. Instead, Groves says she chose songs that follow a line mapping her own life and career. Given her personal investment into each of her songs, it is no surprise that this collection chronicles her personal history. "Greatest hits," then, is probably not the best descriptor, and though it's as nondescript a title as it gets, The Collection will do.

All of Groves' studio albums are represented with the exception of her Christmas album and her special project for new parents. Her 2000 debut Past the Wishing is the least-represented with one track ("Awakening"), and fan favorite Add to the Beauty adds the most with five. The order is almost-chronological, except that the four new songs bookend each disc. On a download, that means there are two new tracks right in the middle, sandwiched between Groves' number one and two iTunes bestsellers, "He's Always Been Faithful" and "When the Saints."

Often, compilation albums are a way to introduce casual fans to an artist's catalog. The Collection does this quite well. The first previously released song on the set is not Groves' biggest hit. It's a thought-provoking and disquieting song about the soul-searching of a girl who stares at the stars when she's not in counseling. This is a perfect introduction: a first-person story song that doesn't fill in all the blanks and doesn't shy away from the reality of God's faith and love in our everyday existence.

Longtime fans will be equally pleased with the track list, though some highly regarded songs are missing, including "It Might Be Hope," "Just Showed Up," and "Twice as Good." It is noteworthy that only three songs are included from Fireflies and Songs, the album that garnered the most lavish praise from critics. Similarly well-received was 2011's Invisible Empires, but only two songs were chosen from that set, perhaps because it's so recent.

The four new songs are excellent additions; "Blessed Be the Tie" is a sweet and simple song of friendship that continues Groves' tradition of re-setting phrases and themes from familiar hymns in her own voice. "Lay it Down" was first featured on Jars of Clay's album The Shelter, performed by Jars featuring David Crowder and Fireflight's Dawn Michele. Here, Groves lets a jangly guitar take the lead to disarming effect.

In a clever sequencing choice, The Collection opens with a song that looks forward and closes with a song that looks back. "Kindness of Strangers" closes the set with a retrospective declaration that even though "what happens here is a mystery," there is a thread of love that reveals hope. It's the opener that's the most interesting of the bunch. "Strangely Ready" leads off with Groves' voice over up-tempo staccato strings, eventually giving way to electric guitar, as if Groves wants to remind us that she's not always an acoustic piano performer. The song has a backstory that's not fully revealed, and its anticipation is contagious.

The greatest thing about The Collection is that it gives us a chance to reflect on the musical history of Sara Groves and appreciate her extraordinary contributions. She is an artist who has caused us to ponder, helped us to celebrate, and called us to action with consistent quality over ten albums. Her music adds to the beauty, and this is a beautiful collection.