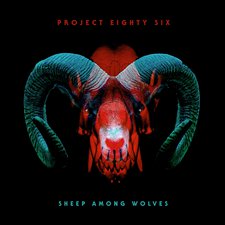 
The build-up for Project 86's 20th anniversary project has finally come to a head. The Pledge Music campaign for the 10th LP kicked off a year and a half ago, and since that time, backers have been treated to an excellent covers EP as well as sneak peeks of the entire track listing along the way. The unfinished songs were a great taste of what was to come, but patience started to run a little thin to hear the completed versions with the full set-up of studio magic (especially since its original due date was June 2017). P86 promised an epic album for their 20th anniversary celebration, but does the final product of Sheep Among Wolves live up to expectations and promises? The short answer is yes. The music is hard-hitting and well-produced, Schwab remains on top of his game with lyrics and vocals, and there is something here for all different fans of Project.

Fans thinking that Wait For the Siren (which is still P86 at their best for my money) and Knives to the Future lacked the overall intensity and heaviness of the band's earlier work should have zero complaints this time around. "MHS" kicks the album off with some heavy riffage and Schwab's definitive screams. The song is heavy throughout and the more melodic chorus doesn't really detract from that fact. The track is a bit of suckerpunch if you're not expecting it, but it starts the 20th anniversary celebration in true P86 fashion. If there was a single title on the album that shouts classic P86, it has to be "Dead Man's Switch." The chorus absolutely rocks as Schwab belts, "One with the speed all that you need; fire to breathe kerosene. Burnt off the rails, destined to fail, this unrelenting hell on wheels!" However, the bridge, while fitting of the song, also seems to sum up Project 86 themselves: "This apparatus is built for one sound; birthed to live fast and die loud. Crush!" In "Imaginary Me," the intensity drops a hair, but heavier, overdriven guitars still dominate the sound. "Freebooter," another vintage-type P86 title, changes the vibe up to more of a Rival Factions era sound. The first half of the album ends with the very first track released to backers way back on October 3, 2016. "By Constantine" is an onslaught much in the same way as "MHS." The sound and quality improvement is evident from the initial release and it is one of the best tracks present.

The second half starts off acoustically with "Copper Wish," but quickly shifts into a hard rock song. The most interesting thing about the track is the recording of the vocals for the verse as it purposely sounds like Andrew is screaming in a hallway. In the initial demo release, these vocals were nearly inaudible, but the final version reveals a nice vocal effect that was used effectively within the song. This is a different sound for P86, but it's executed brilliantly and fits nicely into the album. The title track is next up and is driven along by the bass guitar. The idea of the song, and cover art, was explained by Schwab to backers as, "Sometimes the people we think are wolves are not a threat, and those we view as sheep are the ones who are the actual wolves." "Into Another" was one of the last tracks released to Pledge Music backers and has a really great sound. It's not crazy heavy, but the chorus has a super catchy groove and the song just sounds like something you'd expect to hear in P86's discography. Schwab sings, "Because you traded one failure to fall into another" in a rather poignant chorus. Things start winding down with "The Great Escape," but the intensity and urgency reaches close to its highest point with lyrics focusing on escaping from a religious cult. While trying to portray the urgency, Schwab sings, "Freedom now remains one headshot away; burn you down to make our great escape." The album closes with the heaviest theme on the album -- and perhaps of the band's career. "Metempsychosis" is a song tackling the issue of transgenderism and surgery for a physical transformation. Schwab sings, "Tear a hole into my skin; bury your complacency within. In the end I'm what you say I am; say the words and conjure me to live." This has been a major issue in today's society, but Schwab posits that this behavior is about trying to fix a broken soul. This is the softest song musically on the record, and it's a bit dark, but it's perfectly suitable given the subject matter. It's a heavy closer thematically, but it's a topic that needs to be discussed. While Schwab's position could draw anger and backlash from some, I respect his willingness to talk about a much deeper seated issue on this topic.

Andrew Schwab and Project 86 know how to celebrate 20 years in style. It took some time for everything to come together, but in the end it was well worth the wait. Sheep Among Wolves is one of the heaviest Project 86 albums in quite some time and should stand amongst the best the band has released in their long career. Many things in the album just scream classic P86, but others are still a bit new for the band. It's nice to see a group that knows how to play to their fan base, but still has the ability to stretch outside of the norm a bit, or tackle uncomfortable issues like religious cults and transgenderism. It doesn't get much better than "MHS," "Dead Man's Switch," "By Constantine," or "The Great Escape" musically, but I encourage you to listen to the whole album. Tracks like "Imaginary Me," "Copper Wish," and "Metempsychosis" will stand out for completely different reasons. Congratulations to Project 86 for the accomplishment of making it 20 years, and thanks for providing such an excellent release for us to celebrate with.

The celebration of twenty years of Project 86 (which no sane person can complain about having extended well into year twenty-one) is ready to be wrapped up with the long-awaited follow-up to the battle-themed Knives To The Future. While the wait has been longer than most (probably including the band itself) would have expected, it only takes one look at the cover art to Sheep Among Wolves to know that the wait has been worth it. Obviously, there is that adage about never judging a book by its cover, but when the cover is as beautiful, harsh, cryptic, and clever as this one (featuring the skull of a wolf superimposed over the head of a ram, hence the album's title), it's hard not to get really excited.

And the album itself does not disappoint. It seems like with every Project 86 album, we could argue that one track (in this case, the leadoff "MHS") is the heaviest song the band has ever produced, so I won't make such an outrageous claim here. But there is no question that none of P86's previous eight efforts cranked to eleven as quickly into as this one, which takes one deep breathe before immediately exploding into a face-melting scream and killer riffs. It is an exhilarating way to start off the album, and it does little to relent throughout the rest of the 35-minute runtime (except when it should, lest it get too overwhelming). That said, this is also the first P86 album where listening to certain songs sound like they could belong on past works. Personally, the biggest flaw I could find with Sheep is just how much songs like "Dead Man's Switch," "Imaginary Me," "Freebooter," and a few others reminded me of Knives To The Future, instead of being able to totally stand on its own.

That's a relatively minor quibble, however. And there are certainly moments (most notably the title track, which to me was the album's biggest highlight) where we do get to hear them expand and experiment with their sound. It's also worth mentioning that Sheep isn't quite as unified as previous works. That's not to say that the songs subject matters and styles clash (they don't), but there isn't a specific unifying theme or concept behind the album or a group of songs like Knives or Siren. But on the other hand, that also makes it, from a song-to-song basis, one of the easiest P86 albums to return to over and over again. This is certainly a project any Project 86 fan would want, and for those who aren't already fans, this 20th Anniversary celebration will make it easy to become one. - Review date: 12/15/17, written by Mark Rice

The best words to describe Project 86 are "dark," "cryptic," and "heavy." Fans will be pleased to know that Sheep Among Wolves pushes hard on all three of these traits. This album has their most consistent sound from start to finish, and though this does cause the tracklist to bleed together a bit, it only gets better on repeated listens, and it's definitely worth digging into the lyrics. - 12/8/17, Christopher Smith of Jesusfreakhideout.com

These days, twenty non-stop years is a milestone for a band. The line-up may have changed a number of times, but Project 86 is here to stay, it seems, with their tenth full-length studio album, Sheep Among Wolves. Andrew Schwab and company continue to push their boundaries, but still rock hard, fast, and furious when they need to. If you've lost connection with your love for Project 86 over the last couple albums, Sheep Among Wolves isn't likely to rekindle the flame, as it's more of a continuation of where they've been heading rather than a return to their Tooth & Nail days, but it's a solid offering and proof that hard rock is not dead in 2017. - 12/30/17, Scott Fryberger of Jesusfreakhideout.com