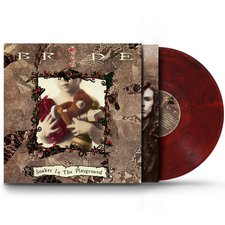 Bride
Snakes In the Playground


With the renewed interest in vinyl record releases still going strong today, indie label Girder Records is helping to fulfill the 90's Christian rock fans' dreams by releasing some of the best albums of the day on vinyl -- some for the very first time. Joining the likes of Idle Cure (my first Christian band discovery), and a slew of releases from Petra, is heavy metal outfit, Bride. Arguably one of the all-time best albums in all of Christian rock, Snakes In the Playground is turning 30 in 2022 and a proper vinyl release is long overdue. Thanks to Girder, the Snakes vinyl release is everything Bride fans have been waiting for.

Remastered with a crisp, clean production, Bride's Snakes In the Playground sounds great on vinyl. It's a little surreal to hear the characteristic pops that come with any given vinyl while listening to Snakes In the Playground, but it lends to the vintage nature of the near-three-decade-old album. The vinyl audio quality is solid, and Snakes feels right at home in this format.

Selections from this album have never left my regular digital playlists, which ultimately, include most of this album. However, it's been years since I listened to Snakes In the Playground from start to finish. In some ways, listening to Snakes In the Playground on vinyl reminds me just why I don't spin the album from top to bottom very often; it hass the same problem that albums like another all-time best CCM release, dc Talk's Jesus Freak, has -- those dang interludes. My biggest beef with interludes is that they just don't have that replay factor and often break up the flow of a given album too much. I don't want to hear Bride's "Salt River Shuffle" over and over any more than I ever want to hear dc Talk's "Mrs. Morgan" over and over (or "Greer" on Free At Last). "Salt River Shuffle" is kind of a cute track with some good bluegrass vibes (which fans would later learn is really Bride frontman Dale Thompson's preferred musical genre), but it's too intrusive to not be able to easily skip - be it on a CD with tracks or digitally excluding on a phone or mp3 player. Still, the album is so good, it'd be unfair to hold these little side trails against it.

Minor nitpicks aside, Snakes In the Playground remains an incredible rock album 29 years since its debut. Like DC Talk's Jesus Freak, most of the album's tracks stand out as hits from song to song; it's hard to pick a sore moment from the bunch at all. And Bride's ballads, "I Miss the Rain" and "Goodbye" are some of the most beautiful ballads in the genre and I wouldn't dare think of skipping them -- even if they do break up the rock onslaught a bit (but then again, I suppose those breaks do give you a little time to catch your breath). Bride also clearly improved upon their attempts at balladry after their 1991 album, Kinetic Faith, where "Sweet Louise" is more of a sore spot than a highlight. (I'm not a fan of gushing on albums these days -- perfect records are few and far in between -- but when an album still sounds fantastic several decades later, it'd be a disservice to the band's achievement to not tell it like it is.)

For vinyl fans, the Snakes In the Playground packaging is pretty complete. The outer sleeve is a one-panel pocket (not a gate-fold), and the album is pressed on a brilliant deep translucent red. It's a beautiful looking disc. Inside the sleeve you'll find a firm cardboard inner sleeve for the disc itself, with a picture of the band from the album photoshoot on one side, and the complete song lyrics on the other side. Girder also sent us the CD release of the album which came housed in a classic cardboard longbox, a popular way to package them for stores in the 80's and early 90's, and includes two high quality Bride collector's trading cards. Girder has done a really nice job giving thought and care into re-releasing a truly classic CCM rock album. Check it out if you're already a fan or want to discover one of the best albums of the genre the best way possible.