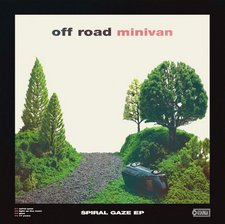 
A decade or so ago, the words "indie" and "emo" were tossed around so much that they'd basically lost all meaning. We knew the type of music when we heard it--alt rock with passionate and ridiculously high vocals that had a similar feel to Dashboard Confessional. The emo side of indie has since fallen out of favor, though artists like Aaron Gillespie help keep the spirit alive. But emo fans shouldn't fear, for alt-rockers, Off Road Minivan, deliver a familiar but fresh take on the subgenre with their debut, Spiral Gaze EP.

The first two tracks, "Spiral Gaze" and "Light up the Room," show off vocalist Ryan "Tuck" O'Leary's range, from the smooth, understated verses to the go-for-broke choruses. O'Leary's frequent belting out and pulling back is one of the most striking aspects of Minivan's sound. He is equally comfortable in the Starflyer 59 realm of chill and the reckless passion of harder bands like Red. "Glow," though probably the catchiest song on the EP, is less interesting than the former two since O'Leary's voice stays in the top of his range throughout. It's a solid song, though it doesn't show his vocal versatility like the other three tracks. By the final track, however, O'Leary doesn't disappoint as he begins with Depeche Mode-like monotone before breaking into an impassioned, full-throated chorus.

Instrumentally, Spiral Gaze is very tight as guitar, bass, drums and keys mesh well with the vocals. As is typical of indie rock, the guitar and bass fill out the background while dynamic drumming provides a counterpart to the demanding singing. Drummer Evan Garcia Renart, like any good indie drummer-or rock drummer in general-is at home with both smooth, syncopated grooves and pedal-to-the-metal slamming. Arguably, Renart's best moment is the opening to "17 Years," where he lays down a bruising, reverb-infused beat that recalls Led Zeppelin's "When the Levee Breaks."

Though short, even for an EP, Spiral Gaze is definitely a strong start for Off Road Minivan. In these four tracks, they bring raw emotion and sincerity, which is often lacking in the rock scene.

I love the idea of side projects. Some of my favorite albums been from side projects, actually. I especially like seeing members of solid bands venturing into other genres on the side which is exactly what Ryan O'Leary is doing. The Fit For A King member has taken his bass and clean vocals and has written some fine tunes with Off Road Minivan. It's a bit of a departure from the heavy metalcore you might already know him for; the Spiral Gaze EP showcases a melodic rock sound that almost seems influenced by bands like Write This Down and - more likely - the Deftones. Songs like "Glow" and "17 Years" are Off Road Minivan at the top of their game so far, featuring catchy melodies, strong musicianship, and a lot of chemistry. This EP did require multiple listens before it really jived with me, but once it hit that sweet spot, I knew I was into it. I'm really hoping that a full length album is not too far in the distance, as I believe this band has a lot of potential to be one of the brightest spots on the current Tooth & Nail roster. - Review date: 3/5/18, written by Scott Fryberger