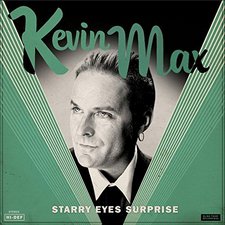 
Kevin Max has already released a stellar album in 2015 with Broken Temples, but apparently that wasn't enough to satisfy his creative mind. Kevin is back with his latest, Starry Eyes Surprise -- a rather eclectic album of cover songs. Kevin covers songs that span not only genres, but several decades. In true K-Max style, he puts his signature all over the songs, but also manages to keeps them all true to their original versions and easily recognizable.

Kevin starts with Nat King Cole's "Nature Boy," which has a sort of jazzy/80's fusion sound. In fact, the majority of the album carries a strong jazz influence. "Nature Boy" is a fascinating start, but is nowhere near the top spot overall. "Moon Over Bourbon Street" keeps the jazz fusion idea going and offers a take on the song that is arguably more interesting than Sting's original. The Sting cover is directly followed by a Sinatra favorite. Kevin does "Strangers in the Night" justice and gives the song a really classic feel. After doing a couple of songs by legends, why wouldn't Jiminy Cricket (Cliff Edwards) be next up? While the Disney standard is done nicely (with almost a Middle Eastern vibe commingled in), it suffers some from an extremely long intro. If you thought the over 6-minute-long "When You Wish Upon a Star" was lengthy, The Smiths 80's hit, "Last Night I Dreamt That Somebody Loved Me" clocks in at over 13 minutes. The song starts off well enough, and carries an 80's influence, but seems to drag and meander on far too much at the end. The experimental treatment would have been much better served as the closing track. Unfortunately, it really slows down, and almost derails, the album when placed in the middle.

Jody Reynold's "Endless Sleep" is up next and Kevin keeps the original rockabilly style; he adds a little extra background to push it over the edge though. This is one of the album's best for sure. One of the best leads right into this reviewer's favorite. "Sunglasses at Night," by Corey Hart, is an 80's essential. Kevin completely turns the song upside down though. The song has an extremely catch "spy movie" vibe that mixes in with a jazzy/lounge motif. It's a super cool take on a great song and I don't think anyone but Kevin Max could've come up with a version like this. Next, Kevin decides to tackle doo-wop with The Flamingos' "I Only Have Eyes For You." Kevin doesn't keep the repeated piano key strokes, or the "doo-bop sh-bop" background vocals, but the remainder does honor the original nicely. Winding down the album, Kevin adds in a nice sounding version of The Church's "Under the Milky Way." The track is super smooth and jazzy. The most interesting thing about the track is that The Church's singer, Steve Kilbey, and Kevin Max have extremely similar sounding voices. It makes perfect sense that Kevin would go after one of their songs. The album wraps up with its second song from a movie soundtrack. "Moon River," a classic sung by Audrey Hepburn in Breakfast at Tiffany's, is Kevin's final selection. The track has more instrumentation than the original, which gives it a great sound, but there's no doubting what song it is. K-Max smartly keeps this one low key and really does an excellent job of making it work for him. It is one of the most enjoyable numbers present on the record.

While I did appreciate the Kevin Max fronted Audio A, it's nice to see him on his own again. Something about that departure sparked a new creative season for K-Max. Starry Eyes Surprise is a solid addition to the work Kevin's been putting out. It won't be for every ear, but if you can get behind a strong overall classic jazz influence, you should find some great enjoyment. The only setbacks and complaints are truly minor in nature. When the biggest issue is that two songs in the middle are too long, you know you have a really great release. Bravo, Kevin, and keep those creative juices flowing!

On the heels of his spectacular alt-rock/worship album Broken Temples, Kevin Max has presented with yet another fantastic project this year: Starry Eyes Surprise. This covers album encompasses a spectrum of decades and genres, providing unique insight to Max's artistic inspirations. His ability to match the quality of famous crooners, psychedelic rock singers, and Jiminy Cricket alike prove not only that he has a mesmerizing voice, but a versatile one as well. On the musical side, Max strikes the perfect balance between capturing the essence of the original songs while simultaneously putting his own signature stamp on them--a feat only the most visionary of artists can pull off. The only criticism of Starry Eyes Surprise is how a couple songs run longer than necessary--specifically the 13-minute cover of The Smith's "Last Night I Dreamt Sombody Loved Me" and the extended intro on "When You Wish Upon a Star"--both of which are otherwise great songs. Though these moments briefly disrupt the album's flow, they are only a minor blips on a beautifully cryptic canvas. - 11/16/15, Christopher Smith of Jesusfreakhideout.com