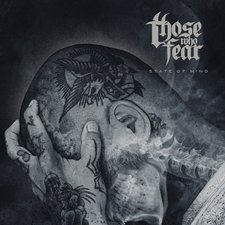 Those Who Fear
State of Mind


While it's true that all music is idiosyncratic, there's something especially indescribable about great Christian hardcore. It's upbeat, sure, but so is the rest; it's energetic, even aggressive, but that's a prerequisite nowadays. So what's the difference? As best I can determine, it's the thoughtful execution, a mastery of tone, that makes talented hardcore artists stand apart. With their third release on Facedown Records, the Pittsburgh-based five-piece Those Who Fear execute this paradigm to near perfection and deliver a standout release in the process.

First and foremost, State of Mind is an album one can enjoy in its entirety, with each track adding something unique and pertinent to the whole. For instance, the pre-release single, "Lost," blends into the latter half of the album rather than leading the charge, not due to irrelevance, but for the simple reason that the rest of the songs are just as good. "Heretic" and "Driven," the two remaining singles featuring guest appearances from Garrett Russell (Silent Planet) and label mate Tommy Green (Sleeping Giant), are excellent as well, but what can be said when every track is a flagship?

Another notable aspect of the release is the exceptional production quality. The pure tone maintained throughout the album marks a definite area of improvement over past releases and adds an irresistible edge to the listening experience. Yet, the most impressive aspect of State of Mind is that it remains engaging throughout, a quality often lacking in heavier releases and a definite advantage of the shorter runtime of just over half an hour.

With each listen, it becomes more apparent Those Who Fear have developed into a special act. And while State of Mind may not break new ground for the band or the genre as a whole, it certainly does reinforce the foundation they stand upon.