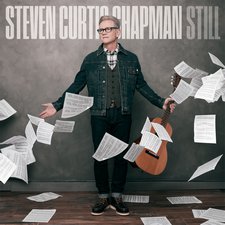 
As time goes on, Steven Curtis Chapman's expansive discography is getting harder to categorize, compare, or critique. At this point, he is CCM's most celebrated artist, and for good reason: he probably is Christian music's most talented triple-threat, as a singer, musician, and songwriter, and regardless of the quality of new music he releases, this esteem will never change. Yet it's hard to avoid a certain amount of pressure that hovers over the 2022 release of Still (Chapman's first release with Provident Label Group). By some measurements, the two-year gap with zero music is a rarity for Chapman, who used to release an album every two years, and if it took longer, there would be a Christmas album, live album, or stand-alone single to fill in the gap. But this two-year silence merely takes us back to Chapman's two singles from 2020, "That's My Dad" and "Together (We'll Get Through This)." It's been three years since his full-length releases of 2019, but those were a live album and a bluegrass compilation album. In the truest sense, Still is the direct successor to 2013's The Glorious Unfolding, meaning it's been nearly a decade since fans have received a CCM/pop album of new material from the industry stalwart. No matter how you slice it, expectations for Still are rightfully high.

So how does it stand up? I suppose that depends on exactly how high your expectations are. If you think Chapman's best work was in the 90's (say, Speechless or Signs of Life), then Still will probably be approximately as enjoyable and uplifting for you as This Moment or All Things New. However, if you (like me) think that The Glorious Unfolding was one of Chapman's strongest efforts of his whole career, then much of Still will sound like a pale imitation by comparison, with a shocking number of redundancies. "Running After You" is a musical retread of "Something Beautiful," all the way down to the two songs containing a near identical bass-synth solo, while "Unfixables" is a lyrical retread of the same song, perhaps with hints of "Finish What He Started" and "Only One and Only You." Alongside a few other similar themes and musical moments shared between the two albums, the lyrics of "Love Now" comes extremely close to "A Little More Time to Love," and "Still" is a stone's throw away from "Glorious Unfolding."

Putting aside one's thoughts on Chapman's discography, it's unreasonable to expect him to release an album that would be adored by his fandom as much as his earlier material, and Still deserves to be judged on its own merits. And once we've properly managed our own personal expectations, the album's many strengths become easier to see. "Unfixables" and "Love Now" might be familiar in the lyrical sense, but they're fresh musical spins on these ideas, boasting one of the album's catchiest choruses on "Unfixables" and the album's most haunting, epic musical backdrop on "Love Now"; these tracks also showcase the strongest production work from Micah Kuiper and Bryan Fowler (who collaborate here with Chapman, I believe for their first time, for about half of the tracks, while the other half was helmed by Brent Milligan, who produced Chapman's last few albums). "I'm Alive" is the standout highlight (despite sadly being the least successful of the pre-release singles), with a massive chorus that contains some fresh progressions and dynamics atop rich guitar playing and tasteful synth work. This track was co-written with Tom Douglas, who seems to be the perfect partner for pushing Chapman's style into new territory, between "I'm Alive" and Douglas's second credit, the thoughtful and semi-experimental "A Desperate Benediction (Peace on Earth)." And while the album's first single and title track, "Still" (which is quite solid, to be fair), made Chapman sound like he might be losing some of his vocal range and energy, with some talk-singing that carries strong grandpa-vibes, "I'm Alive" is a prime example of Chapman belting out high notes as fiercely as ever.

The album does have a few weaknesses that can't be ignored. Some of them are minor and might only bother a small percentage of listeners (such as the closer's bridge sounding very similar to Tom Petty's "Free Fallin'," or two tracks that weren't mastered very well, causing them to crackle in the speakers at their loudest moments). One of the most glaring oddities is the opener, "Welcome Back to Wonder," which plays out like the first half of an unfinished song; presented in its under-two-minutes state, it reads like some sort of introduction rather than a standalone song, albeit an introduction that doesn't really set anything up or have any notable payoffs or reprises later. Shortly thereafter, the album's most successful single, "Don't Lose Heart," quite frankly didn't deserve to make the cut for Still, let alone be promoted on radio, as it contains the longest chain of lyrical cliches in Chapman's discography, atop a musical bedrock that's entirely cookie-cutter. It would seem to me that some of the blame should go to Kuiper and Fowler, who provide passable production work yet whose songwriting skills simply fail to measure up to Chapman's caliber.

The hardest song to discuss is the penultimate track, "Living Color." The complexities inherent within this track are so apparent that Chapman even states such within the song: "If I'm honest, I'm scared to even write and sing this song / I don't wanna somehow say the wrong thing." The song recounts Chapman's relationship with his best friend from 7th grade, and not only is it the album's only song written solely by Chapman, but it's the only song that hones in on the type of biographical details listeners have come to expect since 2009's Beauty Will Rise. Chapman shares how the two lost contact with each other in a pre-cell phone/internet world, yet the crux of the lyric revolves around this friend being black, which makes it difficult not to interpret this song in the context of American culture post-BLM/George Floyd. Out of respect for Chapman and the acknowledged risks he took in writing a song that touches upon the massive topics of racial reconciliation and institutional racism, I will refrain from spelling out the more alarming observations that I could make. And while I've seen multiple people have the same negative reactions to "Living Color" that I had, I have also seen others respond extremely positively, hailing it as the album's runaway best song. So I think this is a song best left to each listener, to react and respond for yourself. Yet even when interpreting the song from the most cynical vantage point, it is still a musically lovely tune that, thanks to Chapman's adept storytelling skills, ends up taking an emotionally poignant turn towards its conclusion.

In full transparency, I did not like Still at first. But looking back, I also wasn't very enamored with The Glorious Unfolding upon its release, which grew to become one of my favorite albums of all time. Chapman has proven time and again that his work deserves more than first impressions and immediate conclusions, and I am glad that I took time to find much about this album worth enjoying. However, the most exciting element of this release cycle for me was how the announcement of Chapman's new contract with Provident Label Group came with the suggestion that the singer is entering a refreshed season of musical fruitfulness -- that even though Chapman is (upon publication of this review) about to turn 60 years old, he hasn't run out of steam and has plenty left he wants to do with his career. I hope this pans out and that ongoing collaborations with the likes of Brent Milligan, Tom Douglas, Colony House, and the like will result in future albums that capitalize on the best of what Still has to offer.

Uncle Steve is back! After a nearly ten-year absence from a proper all-new full-length album, its nice to hear whats been on the mind of the legendary artist. Steven Curtis Chapman has been such an integral part of believers' lives (myself included) for over three decades, that any new music brings with it a buzz of anticipation. Rightfully so. Though his hairstyles have run the gamut from mullet to the middle part of the 90s, and now aged gray with wisdom, one thing hasnt changed, and thats his ability to encourage and uplift listeners with his consistent pop (sometimes country-leaning) songs. Many of his tunes have soundtracked different ages and stages of longtime listeners' lives. Well, its been some time since an entire album of his has captured me, though 2013s The Glorious Unfolding came close, so I approached Still with a high measure of cautious optimism. All in all, Im happy to report this is a solid, though far from the perfect, offering. To my ears, the first half of the album is the strongest, with the title track Still, Dont Lose Heart, Im Alive and Kindness making up my favorites. The back half is fine, but stands out for the wrong reason as the song Living Color sticks out like a sore thumb. While I think I get where hes coming from, the lyrics alone (without further context) leave me wondering about the ultimate aim of the song. This listener cannot escape feeling the song may be better left as a personal tune unreleased to the world without a different or more in-depth explanation. Outside of that, the b-side of the album has other mid-tempo moments (Love Now) that are pleasant enough to consider second-tier highlights, and closer Trying to Get Back Home had me until a closing bridge portion that treads too closely to the melody of "Free Fallin'" by Tom Petty. Once I heard it, I had trouble staying in the song. Overall, while there may have been some trepidation on his part to re-enter the arena he dominated for so long, there really shouldnt have been. Yes, hes in a different stage of life, but his unique viewpoint and experience are needed in the genre. All in all, Im glad to hear from Chapman again, and I hope there are many more albums still to come. - Review date: 10/15/22, Josh Balogh of Jesusfreakhideout.com