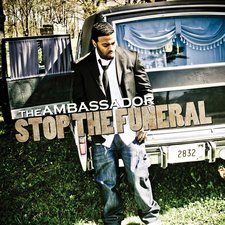 The Ambassador
Stop The Funeral

The Ambassador, founding member of the Cross Movement, is back with his third solo effort Stop The Funeral. It's aptly titled, since many of us thought that he did indeed leave the Christian rap game. Well, as mentioned, he is back and currently rolling with Xist Music (Da T.R.U.T.H.) with about an hour of hip hop for your listening pleasure.

The album opens with "A-M" and showcases some seriously good production. The beats are hot throughout the entire album and are some of the best I've heard in a long time. The next few songs offer touches of R&B in the hooks while blending nicely with Deuce's lyric spitting skills. His skill set is enough to keep serious rap-heads happy while the hooks will bring the radio-friendly rap fans in. That same idea, blending rap with R&B, doesn't work in every track however. "Up Down," Favor," and "Bring You Out" are not on level with the earlier attempts to marry the two sounds, and each song has more weak points than positives. But "Talk This Way" and "Put It Down" are stellar straight-up rap joints that are happily welcomed in the midst of the R&B touches.

"Crumbs" delivers the art of rap storytelling and "Your Love" brings home the Christ-centered album by speaking about the depth and greatness of God's love. There are many guest spots, including the very talented Canton Jones and KJ-52, adding some good diversity. Even more diversity comes from touches of production speed and some added guitar strings. The final track, "The Reunion Cypha," is a perfect ending and one that only true CMR fans will fully appreciate - it's a great way to wrap a really solid release.

All in all, most fans of hip hop will enjoy this record and many will make the acknowledgment that this may be the best rap joint to drop this year. There are a few songs that could have been omitted, but they don't take away from the overall quality of this album. I fully suggest that you go and pick up Stop The Funeral as soon as it releases.