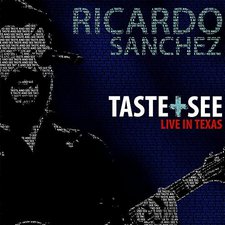 
In a genre dominated by Hillsong, Jesus Culture, and Bethel Music, Ricardo Sanchez has slowly been making a name for himself in the worship industry. Even if you haven't heard his name before, with a commanding voice, infectiously joyful sound, and a passionate heart for God, Ricardo Sanchez will be hard to ignore on his latest live album, Taste + See.

The title-track, "Taste + See" is the best example of Sanchez's overall sound for this album with blaring horns, blazing guitars, and dynamic backing vocals (think Lincoln Brewster with horns and a gospel choir). "Greater, Greater" follows the title-track as the most accessible song on the album, thanks to its instantly catchy chorus. As if his sound isn't exciting enough, Sanchez throws a couple curve balls throughout the album--the island influenced "Over Me (All That's Within Me)" and the Hispanic-styled track, "Tu Gracia" (which is mostly sung in English and features Blanca, formerly of Group 1 Crew). Both are fun tracks with encouraging truths about God and all that he's done for us. One the more energetic tracks, album opener "You Are" makes you think Taste + See is more youth-oriented than the rest of the album suggests. It's a lively praise song (albeit a little repetitive), but perhaps it could have been moved down in the live set.

When Sanchez slows things down, he can pack as much of an emotional punch as he can get a crowd riled up. "Relentless" (previously recorded on his album It's Not Over) and "A Bridge" are great examples of this, with lines like "You God are relentless / with forgiveness / how it covers me / runs to me." At the same time, the slower songs are where we see some of the album's weaknesses. First is that a few of the songs tend to drag on a bit too long. The biggest culprit of this is "You Surround Me" with its eight-minute run time at the slowest tempo on the album (around 56 BPM). "Faithful" is also a bit long with the track running at five minutes in length and its reprise adding another four minutes. The overall songwriting could also be improved a bit as Sanchez occasionally uses lyrics that are fairly common in worship music such as "Your kingdom come / your will be done in me" or pulling from Delirous?, "I could sing of Your love forever." That said, the majority of the lyrics will be an encouragement to many listeners.

Overall, Taste + See was a pleasant surprise. Ricardo Sanchez and his band display a tremendous amount of musical talent and zeal for Jesus. The live format works quite well here, especially because the production is excellent and the tracklist is broken down with reprises to allow you to skip the extended outros and banter if desired. If you are a fan of Lincoln Brewster, Israel Houghton & New Breed, or other worship artists in that vein, definitely give Taste + See a spin.