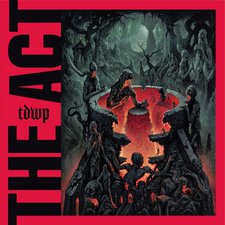 The Devil Wears Prada
The Act


Beginning in 2005, The Devil Wears Prada came up in the MySpace age of metalcore, where everyone knew at least one person in a metalcore band. But the guys took their craft to another level and made The Devil Wears Prada into an internationally known band that has released powerhouse albums through Ferret, Rise, and Roadrunner Records. Signing with Solid State at this point may seem more than slightly out of left field, but it is in fact the next step in their career. To further the surprise factor, theyre coming out of the SSR gate strong, but with their softest album to date.

Now when I say softest, I dont mean to imply that the band has gone soft. There are still classic TDWP heavy moments, but they serve more to accentuate the songs rather than to dominate them. This approach makes more sense when you find out that all of these songs were composed on a piano (a first for the band). The Act both opens and closes with relatively heavy tracks. Mike Hranica is no stranger to screaming and growling his way through songs, and brutal riffs and double bass are far from absent (The Thread pops up in the middle of the tracklist to remind us of that). This is certainly no pop rock album, as Ive heard some describe it, but this go-around for the band does come with a heavier emphasis on indie rock and hard rock than before. Some of the piano made its way into the album, as well, which is most noticeable in the milder moments of As Kids.

If youre losing interest, let me say that The Act is a solid album from start to finish. My first listen was a bit less than enjoyable, mostly due to the unexpected sound, but after the initial shock wore off, I kept finding more and more things to love. The middle section of the album is particularly strong; from Please Say No through As Kids, the album is at its best. Ive always loved the heaviness of Dead Throne and 8:18, but its hard to beat the low-key, bass-filled grooves of tracks like Please Say No and Diamond Lost. Not to mention, both of those tracks feature vocal melodies that are as stellar as they are addictive.

Its safe to say that The Act is not the TDWP album that fans were expecting - at least, not before listening to the singles the band had released to streaming services prior to its full release. And theres no doubt that some of their fans may be turned off by the lighter side of the band, which, if nothing else, is at least understandable. But despite the changes, The Act stands tall as one of The Devil Wears Pradas best albums.