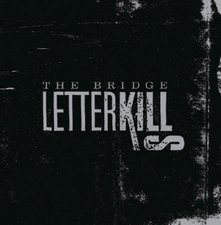 Mainstream label Island Records has pulled a "Wind-Up" and signed a group of "Christians in a band." Yes, Letter Kills says they don't want to isolate the kids that "don't really care" about Christianity. "Our big thing is to unite people, not push them away with the music we play," says the band on their official site. A debatable idea, but, to each his own.

After releasing a successful EP, Letter Kills hits the national stage with their debut The Bridge. You can trace elements from many different emo/rock bands, but the best representation of their sound would be a direct mixture of Kids in the Way and Dead Poetic. Take Kids in the Way's rock n roll swagger and Dead Poetic's signature melodic hard rock sound, and it all adds up to Letter Kills. In addition, Matt Shelton's voice sounds, at times, like Dave Pelsue of Kids in the Way and, at other times, a lot like Bradon Rike of Dead Poetic. And anyone familiar with both of those bands can tell you of the diversity between them, making a train wreck in the middle of the tracks an intriguing listen, to say the least.

Grinding guitars and Shelton's emotional vocals lead the way through twelve tracks that at first listen may seem a bit repetitious, but after a few more spins, most every fan of emo, rock, alternative, and the like will find a new favorite in Letter Kills.

With the exception of obvious spiritual topics on "Lights Out" and "Carry You" (The former of which speaks about living your life for God, and the latter talking about God carrying you through the hard times), Letter Kills mostly deals with broken relationships and wanting to work through them. The lyrics are, at times, even a bit cryptic.

They share a label with Hoobastank, Sum 41, Thrice, Thursday, and Saliva. This Fall, they'll be on tour with lostprophets and Story of the Year. And they have the talent to possibly even be the "next big thing" in the music industry. Not bad for a band that formed less than two years ago. Let's pray they use this opportunity to be a light in a very, very dark world.