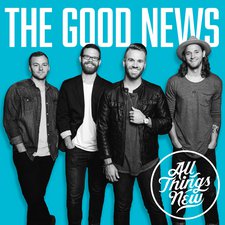 All Things New
The Good News

All Things New is seeking to redefine themselves with their second album, The Good News. After the success of their self-titled debut, the band was reminded they don't want commercial success, but to spread the gospel. "We aren't in this for anything other than reaching people with the message of the hope that they have in Christ," lead singer Garrett Hornbuckle said. The change in focus on this album is noticeable, but so is a shift in musical style. It seems that, along with their commercial success, All Things New has also abandoned the southern edge to their poppy sound, and simply become pop. This album features even more crowd vocals than the last, including "oh-oh-oh"s in all of the songs. For listeners looking for upbeat music they can clap and sing along to, The Good News definitely fits the bill.

For the most part, the album does what the band intended: to proclaim a life of freedom through Christ. The album's title-track says the good news is "that He came to save, He made a way." It emphasizes the sacrifice of Jesus and the freedom Christians experience through that payment for our sins. "We Are Free" also talks about freedom declaring, "We're reaching for our dreams, brave enough to sing we are free." Rather than focusing on Christ, this song centers on the Christian's ability to face their fears and go have adventures. The following song, "Who We Are," speaks of freedom from the struggles of life, such as raising a child as a single mother. Like "The Good News," this catchy song attributes this freedom to Jesus' sacrifice, "there's a promise for the lost, there is power in the cross." Although it's good the band maintains their emphasis on the gospel, these songs seem somewhat redundant, both in lyric and sound.

All Things New does a decent job at arranging the tracklist with rising emotion. The album begins with "You Love Me for Me," a song about how God loves people even when they lose their way. The second song, "I'll Be" hones in on what it's like during times of loneliness. These feelings of isolation are shaken off by the third track, "Can't Hold Me Down," which tells the devil he has no power over them. But by the next song, "Believe," the band portrays the times when one is completely unable to feel God, and needs God's help to even believe in his existence. From there, they include the song, "Take Me Back," another cry for God to rekindle the flame of faith. Finally, the aforementioned songs firmly pronounce the liberty we have in Christ. With this arrangement, All Things New takes the listener on a journey from belief to doubt, to reaffirmed belief. One song that breaks the flow of this linear theme is "Changed," a song written to a third-party that the singer has hurt in the past. Its inclusion at track nine is confusing and not cohesive with the rest of the album.

Overall, The Good News seems to lose the interesting flavor the band displayed in their debut album. It is clear they had fun with the album and fulfilled their passion for a straight-forward presentation of the gospel. Listeners should expect an uplifting experience, but should not get their hopes up for a deep or spiritually challenging album.