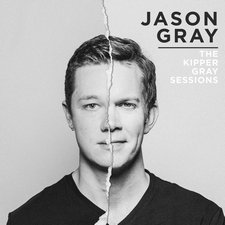 
It's not uncommon for children to follow in their parents' footsteps, whether in careers, hobbies, or likes and dislikes. The music industry is no different, and budding musicians often follow after their established parents. In the Christian music industry--a market that bends over backwards for family-friendly fare--it makes for a delightful narrative. Perhaps a little rarer is when parent and child team up for a project. With Jason Gray's latest EP, The Kipper Gray Sessions, the veteran singer/songwriter worked with his son to produce five radio-ready pop tracks.

"Mountain" leads things off with its analogy of believers being individual stones that together form something greater. Considering the image is usually a house, this song feels fresh for its perspective. Next is the catchy "Be Your Own Kind of Beautiful," which lauds uniqueness as something not to be ashamed about. "Love Life" promotes taking time to enjoy the flowers with its constant refrain of, "If you love life/It will love you right back." The song is encouraging but oversimplifies the issue some (Will life always love me right back? What does that even look like?). "Time" stands out for its ambiguity and tension as it navigates a child working through some tough times with his/her parents. Who's right? Who's wrong? The track never discloses this, but its hip hop beats and moody tone help it stand out. This short EP ends with perhaps its strongest tune, "Becoming." Adding in acoustic guitar as the lead instrument, this song about sanctification is a fitting closer.

Perhaps the biggest question here, though, is how Kipper Gray's production holds up? The answer is, very well! This EP is perhaps not as polished as fellow pop offerings, but that works in its favor. It has a raw tinge in it that backs the emotions of the songs. The tracks also avoid sounding too similar and never reuse the same trick twice. Perhaps more could have been done to the music and lyrics to make them stand out above their peers, but the production overall shows great promise for the young producer.

The Kipper Gray Sessions, which barely makes it to 15 minutes, is a satisfying listen that teases of greater things to come. It could be seen as an EP of standalone singles or a collection of encouraging tunes from a father to his son. No matter how you spin it, though, this is a solid pop offering worth consideration.