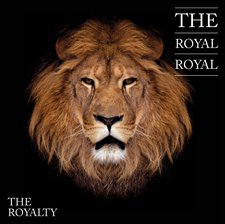 The Royal Royal
The Royalty

The word "worship" is truly a divisive one. As both a physical action and a mindset, it unruly complicates matters when it's the name of an entire musical genre, and within the last couple decades, what actually constitutes a "worship song" has become a fuzzier and fuzzier line. On top of that, so much of the "worship genre" has been tightly locked into one singular approach, so when an odd band like The Royal Royal comes along and makes a decisive move with an album like The Royalty, they raise a welcomed stir.

Headed by brothers Nathan and Gabe Finochio, The Royal Royal is an absolutely uncanny act to analyze; their conscious creative decisions are so obvious, but are so difficult to critically describe. The Royalty, in its bare bones, is forthrightly a "worship album," and every track is strictly vertical in reverence. It's all original songwriting, too, which is a major plus in the field of worship music; though many tracks are ripe for use in congregational settings ("Praise Him," "How Wonderful," and "My Salvation" are especially strong as potential new favorites for churches), not every song is strictly congregational in intent, and that element successfully differentiates The Royalty from a run-of-the-mill worship project. This project dons many hats, and it only adds to the strength of the album's construction.

But what's even more distinct about The Royalty is the immense attention to being unique in their field; citing influences from popular alternative bands such as LCD Soundsystem and Arcade Fire (but far more the latter than the former), TRR sounds nothing like any worship act previously heard, and that's no exaggeration. Sometimes there's a minimalist drum and guitar mix ("Heartbeats," "How Wonderful," "My Salvation"), but some distorted guitars and frequent synths often overpower the musical soundscape in an engaging and intuitive manner ("Life In Your Hand," "October"). Nathan and Gabe often trade-off on vocal responsibilities, too, and that often shifts the focus to the message and not to themselves, which makes the worshipfulness stick even better with the listener. In general, TRR never stays in one place musically for too long, and that's especially vital for a fourteen-track project like The Royalty.

Even a name like "The Royal Royal" piques the interest of the sharp listener. According to Nathan, "It's like a name so nice, you say it twice," and it fits with the sound tremendously. While seemingly undescriptive, it fleshes out the band's approach: intentionally artistic admiration based on repetition. There are several points, however, where their repetition mutates into repetitiveness, and that turns out to be the most obvious downside to TRR's concept. For instance, while the bridge to "To You" ("I can see it coming now, I can see it coming now/hope is rising") is anticipatory and effective as such, the listener eventually ends up anticipating the end of the song after repeating this bridge ten times over. "Heartbeats" is an even more egregiously repetitive, singing the bridge "In You, I am alive" a total of twenty-nine times. When many mainstream worship albums with a lot less impressive musicianship and songwriting fall into this problem, it's especially regrettable to see a promising band like TRR do the exact same thing.

In The Royal Royal's own words, "There is so much that we have to be thankful for and be creative about," and indeed, both thankfulness and creativity abound on The Royalty. The next step, then, is to channel this positive energy brimming with possibilities and turn it into a strong sophomore release. The Royalty still conforms to the set standard of a worship album too closely to call this album truly revolutionary, but The Royal Royal is nonetheless one of the most exciting worship acts to come around in a long time, and here's hoping that they'll only rise in innovation from here.

Barreling out of the starting gate atop a barrage of heavy synthesizers and invigoratingly high beat-per-minute counts, the frenetic opening track, "Love," and the lion's share of what follows, is hardly the sort of thing one would expect to find on, say, the latest Ben Harper or Emmylou Harris release. Indeed, teens and twenty-somethings will think the twosome sound an awful lot like Franz Ferdinand. Those in their thirties will cite artists like The Echoing Green as the closest points of reference. And moms and dads of both groups will swear that the Human League and Depeche Mode have, at long last, recorded an album together. Depending on the listener's love of early '80s New Wave music, the bulk of The Royalty will either be a pleasantly entertaining diversion or the sort of guilty pleasure they return to time and time again. As engaging, though, as the synth-pop-based numbers are - and such is certainly the case - the most truly inspiring moments come when the band purveys what some might call more image-appropriate material. The folky, acoustic guitar-based tunes "How Long" and "October," both of which seem all too brief at less than two minutes, possess a stark, minimalistic beauty that renders each of them positively transcendent.

A few of the songs tend to drag on a bit. And cuts like "Saviour" and one or two others may strike some as slightly too precious for their own good. But, even with these missteps taken into account, The Royalty is a distinctly winning effort that offers something for pop, folk and dance music lovers ... and their parents. - Bert Gangl, 10/5/12