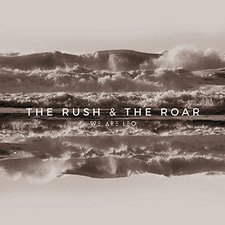 We Are Leo
The Rush & The Roar


The first few seconds of "Dimensions," the opening track to We Are Leo's The Rush & The Roar, sound like a mix of One Direction's "Best Song Ever" and the 1975. I appreciate the way artists such as 1D and the 1975 take cues from the 80's but repurpose those sounds in a fresh, modern way. During these opening seconds, I thought I was about to hear something similarly special from the Dream Records pop band. Then my hopes were shattered with the entrance of David Duffield's stale, characterless singing, proclaiming lines like "same song on the stereo" with an odd sense of importance. A strong chorus nearly keeps "Dimensions" afloat, but catchy choruses aren't able to save every song on this album -- especially when most songs boast entry-level lyrics for kids who've never heard music before.

Oddly, this album is front-loaded with its weakest songs. "Astronaut" is as bad as it sounds. "CRZY AWSM" lacks any sense of momentum or urgency for what's supposed to be a party song...and it also lacks any discernible pattern for dropping vowels in its title. (They know they left an "a" in there, right?) "Low Key" is Tobymac-lite, employing Funk 101 bass-playing and a solid guitar solo to establish itself as the only musically noteworthy song. (However, drummer Joshua Sentner does spice up a few tracks with his perfectly-timed fills.) "Warrior" makes the album's most direct reference to Christ with the line "nail-pierced hands," but otherwise the song's message gets confused between God's-strength-through-our-weakness versus self-empowerment.

When "61 / Twenty-Three" shows up, the mid-album appearance of such a great song seems accidental. Thankfully, this song marks a turning point on the album. "Salt Life" is a sugar high of surf rock, replete with a Switchfoot reference. The title track aims for the alternative rock of early-Mae, Falling Up, and Over It, creating a highlight that suggests We Are Leo should forever leave behind bubblegum pop for more rock. "Young Eyes" trails off into meandering territory for its final minute, but it begins as a shockingly beautiful track with lush harmonies and the most modern production on the album. Unfortunately, the endings of most of these songs are crippled by an overabundance of background vocals. And while the whole back half of The Rush & The Roar stays consistently enjoyable, "Shine Forever" and "The Way That I Feel" can't quite stand under the weight of their pedestrian lyrics.

There's also something more insidious to these lyrics than utilizing cheesy cliches. No joke: eight of these eleven songs use the word "feel." This word is usually attached to some vague reference to God, e.g., "I feel your love/strength/breath/hope." And while eight of these songs also make mention to celestial bodies ("sun," "stars," etc.), the insistent use of the word "feel" does more than make we wonder if the album was written from a vocabulary of 65 words. This album presents a version of pseudo-Christianity that's all about positivity, sunshine, and "feeling" God. There's barely a lick of biblical doctrine throughout; instead, we get a lot of hopeful feelings that everything's gonna be alright. (Ignore that Jesus promised hardship and persecution to his followers.)

Honestly, I would love to hear an album of worshipful pop like "61 / Twenty-Three" (the album's most theologically-sturdy track), an album of unabashed surf rock a la "Salt Life," or an alt-rock album in line with title track "The Rush & The Roar." But I cannot recommend the first half of this album to anyone, especially not the type of cynics who already accuse Christian music of poorly rehashing secular music. But I also can't wholeheartedly recommend the latter half of the album to Christians, in fear that it will support an individualistic religiosity that's more Sola Feels than Soli Deo Gloria. Either way, unless lines like "light it up and let it glow / hey oh come on let’s go" or "rock and roll blue sky feeling" really get you going, this album (as a whole) is not for you.