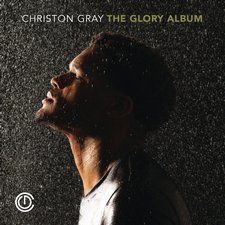 
The first time that I heard Christon Gray, I knew I had found something special. This dude could sing so eloquently and spit rhymes with the best of them. The more I listened to his earlier work on Collision Records, W.L.A.K., and guest spots, I became enamored with what he would do next. So when he left Collision Records for Kirk Franklin's Fo Yo Soul Recordings, I honestly got nervous. I wasn't sure what such a polished label would do for such incredibly raw talent. The Glory Album is our first insight into this new chapter of Christon Gray's musical career, so let's find out.

"The Glory Part 1" is the opening track and we're welcomed into a simple, yet beautiful song with the amazing vocals of the Ohio native. "Stop Me" follows and is sure to quickly become a fan favorite. The hand-clapping, head-nodding beats laid behind some clever lyrics, such as "Feels like the cold war, but I ain't rushing though. Slowing things down, no concussion bro" and "I'm just trying to give them less Cosby, more Huxtable." It's one of those gems of a song that I don't ever see myself not loving. "Ft Knox" comes along next with unique production setting the backdrop of an honest relationship track. Gray definitely appeals to those searching for great R&B love tunes with this track, the deep-hitting "Afraid With You," and "My Love Is Real," which had me drawing comparisons to Usher and Marvin Gaye.

"Connor McDees" comes along later and is sure to make hip hop heads happy. The artist brings along his brother Taelor and Skyzoo to make one of the best rap tunes I have heard in a while. Honest and personal lyrics are spit by each, while hot beats keep your head moving the entire track. Later on, "Black Male (Blackmail)" gives us the musician's perspective of being a black man and the prejudice that can ensue. Many of us won't understand what that feels like, but Christon is real, transparent, and honest in showcasing what black men unfortunately have to deal with at times. Lastly, "Nowhere" and "Follow You" are solid worshipful tracks with the former focusing on God's amazing rescuing of us, while the latter is a declaration to trust in Him always.

I am going to say that a couple of these tracks have been released close to a year ago, and I simply wish that The Glory Album offered more new music. Other than that, this album is nearly perfect. Christon Gray delivers the entire package of that smooth R&B sound with hip hop blending in, while tossing in some contemporary tunes for many fans to enjoy. This will be an album I plan on playing for a long time to come.