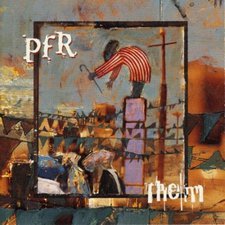 PFR's final album before their breakup in 1996 is perhaps their best album ever, and in my opinion one of the greatest Christian rock albums of all time. The trio from Minnesota crafted a musically strong, lyrically deep, and spiritually perceptive LP that is unusually haunting at the same time.

For those of you who know what I mean, this album has a very familiar 'PfR sound' to it. Not to say that all of the songs sound the same, though. There are heavy rock songs like 'Pour Me Out' and 'Tried To Tell Her', acoustic ballads such as 'Fight' and the beautifully orchestrated 'Garden', and then other straight up rock and roll tunes like 'Anything' and 'Ordinary Day'. One song that stands out in particular is the title track, which has a very dark, haunting sound to it, yet delivers an upbeat chorus.

This album is near perfect, it's only flaws being that it sometimes sounds over-produced (which may be why the music sounds so 'despondent' at times) and the song 'Say' isn't particularly strong.

Very touching, spiritually uplifting, and well-constructed, this album is a must-have for any Christian rock fan.

This alt-pop/rock band turned in a fine pseudo-final album in 1996 when they announced this would be their last album as a band (they later reunited in 2001). Them contains some of the band's edgiest songs and some of their most sensitive. From its strong, aggressive opener to its delicate finish, Them is a memorable swan song. - 8/26/06, John DiBiase