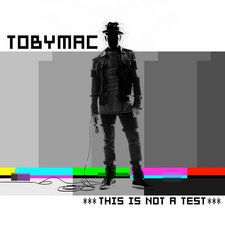 TobyMac
This Is Not A Test


With music listeners craving the latest and greatest, maintaining relevance in the music industry is a difficult task. Some artists that attempt to stay current "sell out" too much for their die-hard fans. Others refuse to adapt to newest trends and fade from the listener's interest. Treading the line between accessibility and artistry, TobyMac has stayed at the forefront of the industry for most of the three decades he's been making music and This Is Not A Test will only continue to solidify that status.

With well-placed horn sections and a hook that will be locked in your head all day, "Like A Match" introduces Toby's fun and varied musical palette as he declares the importance of sharing the love of Christ with others. "Backseat Driver" might be too corny for some, but it's nonetheless a catchy song about giving control of our lives to God. Toby's son Truett appears in the second verse in lieu of an exclusive "Tru-Dog" track, which is a welcome change given how awkward "Mac Daddy" was on Eye On It. The title track keeps the momentum going with a fresh blend of EDM and rock but the album changes gears on the more laid back (but still upbeat) "Lights Shine Bright." Though the chorus is repeated one or two times too many, it's an enjoyable song characterized by hefty bass and a little Jamaican flavor.

After a short press conference interlude at the end of "Lights Shine Bright" (featuring a cameo from Jamie Grace), "Til The Day I Die" cranks things up with a hot hip-hop beat and meaningful lyrics: "blood, sweat, tears / It's a callin' / and if I can't walk, then I'm crawling." Up-and-coming rap talent NF almost steals the show here with a slick rap that contributes to more than half of the song's lyrics. Lightening the mood, the funky "Feel It" is a danceable tune about experiencing God's presence in our lives. Like "Lights Shine Bright" before it, the song is a little longer than it needs to be, but a false ending and a surprise appearance from Tauren Wells of Royal Tailor keeps the music from growing stale.

Album highlight "Move (Keep Walkin')" is the most dynamic tune on This Is Not A Test, with soft acoustic strumming, dance-pop flavored guitar riffs, chilling gospel choirs, and playful horns all driving the music at various moments in the song. But the selling point of the song is the gritty chorus which commands listeners to "move" and press on when your prayers aren't being answered. Toby doesn't leave us there though. On "Love Broke Thru" he sings of God's relentless love for all of us stubborn and hopeless fools. This narrative song, which is slightly reminiscent of "Wonderin'" from Tonight, features a steady drum beat over talking/rapped verses and a soaring reverb-heavy chorus where Toby even uses falsetto.

Nearing the end of the album, the humility focused "Beyond Me" is one of two straight-up CCM styled songs. It wasn't a strong lead single, but it fits well in the context of this album and provides a nice preface to the track that everyone's been waiting for: "Love Feels Like." Being the first DC Talk studio recording since 2007 (Kevin Max's "The Cross"), this is a glorious reunion. The "Luv is a Verb"-themed lyrics and edgy pop/rock sound may not be groundbreaking, but between Toby shouting "this is what love feels like," Kevin's graceful yet haunting vocals, and Tait's smooth delivery, "Love Feels Like" is a vocal masterpiece. After such a monumental track, "Undeniable" has a big role as closer, but its all-too-familiar CCM sound and lyrics end the regular album on a weaker note.

The deluxe edition of This Is Not A Test includes two b-sides and two remixes which add nice value for those who can't get enough of Toby's music. "We Lift You Up" is an upbeat worship song featuring Ryan Stevenson, while "Fall" is a love song to Toby's wife Amanda. The latter is a sweet song, but it seems a little less personal than "Made For Me" from Eye On It. This might be a taste difference, however, as some people might find the new song easier to relate to since there are less specific details about their marriage. Soul Glow's rendition of "Beyond Me" introduces a lush post-chorus and more lyrics towards the end of the song and the Garcia mix of "Like A Match" is a safe but entertaining interpretation of the album opener.

Those that did not like the surplus of mid-tempo radio-ready tunes on Eye On It will be pleased to know this album is loaded with energy and musical diversity. Toby's ability to dabble in a variety of styles and utilize several guest features, without sounding like a dilettante, is impressive. With catchy beats and Christ-centered lyrics, This Is Not A Test is another solid entry for this talented solo artist.

For artists such as TobyMac, every album is a statement. Three years ago, the EDM-inspired effort Eye On It seemed to designate Toby as a trendy pop jam recordmaker and little else, leaving the inventive side of his persona to the wayside. But then comes a record like This Is Not a Test, which reminds listeners of just why Toby has been a revered industry juggernaut for so long. With his sixth studio album, Toby has refreshed and reloaded, offering up eleven tracks that feel purposeful and complete. While there are some minor improvements that makes things feel more polished overall (such as TruDog's best career showing with his guest verse on "Backseat Driver," as well as fewer moments of out-of-place "cuteness"), there's definitely a "business-as-usual" feel that creates a better atmosphere than Toby's last few albums have showcased.

What Toby has always done best is leverage talent around him to make his projects memorable, and This Is Not a Test is full of these moments. The most energetic, and possibly the most accomplished, tracks here are the high-octane Capital Kings-collaboration title track and the stylistically diverse "Feel It," which feature Mr. Talkbox and Royal Tailor's Tauren Wells at their finest. Add in guest spots from newcomers Hollyn ("Backseat Driver," "Lights Shine Bright") and NF ("Till the Day I Die"), and the entire album is larger than the sum of its parts. "Love Feels Like" perhaps isn't dc Talk's best showing, but it's also enjoyable to hear Toby, Michael, and Kevin all on the same song again.

Toby is 50 years old in 2015 (a topic discussed in "Till the Day I Die"), but This is Not a Test shows no signs of the producer slowing down, and it could very well be Toby's most complete album this side of Diverse City. - Review date: 8/2/15, written by Roger Gelwicks of Jesusfreakhideout.com

If nothing else, Tobymac's newest project is a welcome change from the pop-flavored musical direction each of his albums has been trending towards. Thankfully, this album is more than just that; taking a lot of cues from his Momentum and Diverse City days of hip hop/rock with the addition of solid EDM flavorings, it is hard not to enjoy This Is Not A Test. Catchy, thumping songs like the title track and "Til The Day I Die" balance well with less intense, more beat driven track like "Move (Keep Walkin)," "Love Broke Thru" (not a cover of Keith Green's classic), and "Fall." A few of the songs are a little underwhelming, such as the radio-friendly "Beyond Me" (though to be fair, it works well in the context of the album) and the unnecessarily long "Lights Shine Bright." Plus, while I figure I'm in the minority on this, I wasn't that impressed with the much-anticipated dc Talk feature "Love Feels Like." But overall, this is a very welcome album to come around, and I would be only too happy if Toby keeps exploring this sound. - 8/8/15, Mark Rice of Jesusfreakhideout.com

TobyMac just keeps on rolling. "Beyond Me," This Is Not A Test's first single, released way back in the mid-winter, was a bit underwhelming. But thankfully, the rest of This Is Not A Test is chock-full of diverse sounds and sing-along tunes that show that Toby has not lost his ability to meld sounds and genres like a master chef. Lead off track, "Like A Match," features a snazzy horn section and funky beat that lifts up the album's theme of taking life (and spiritual life in particular) seriously. "Backseat Driver" features the album's best hook and TobyMac's son "Tru" on his best guest verse to date. "Lights Shine Bright" may be the most interesting tune of them all, with a proto-Lorde style, minimalist beat with a reggae twist and chanted vocal courtesy of guest vocalist Hollyn. The guest list can be overwhelming at times, but the dc Talk reunion "Love Feels Like" is a welcome return. Overall, This Is Not A Test is a great, creative mix of uplifting sounds that proves that there is much more left in TobyMac's gas tank. - 8/11/15, Alex Caldwell of Jesusfreakhideout.com