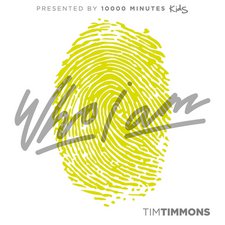 Tim Timmons
Who I Am


I chanced upon a kids' channel on satellite radio the other morning, and was assaulted by the following lyric: "Shell, meat, lettuce, cheese," repeated fivefold. The virtues of Parry Gripp fandom notwithstanding, surely there remains a place for quality children's music with spiritual merit.

Fortunately, a host of Christian artists have included kids and families in their ministries, and have crafted music for children with a bit more of a message than a nondescript recipe for tacos. Count Tim Timmons among those with his latest independent release, Who I Am.

Audiences might know Timmons from his miraculous battle with incurable cancer, singles like "Starts With Me," or perhaps most recently for his incredible 360-degree video for "Everywhere I Go." In addition, kids and families might know Timmons from his work with Saddleback Kids (and the Skuppets) or his new family blog series. Timmons launched a ministry called 10,000 Minutes, named for the number of minutes in a week left to spend beyond a regular church gathering. Who I Am is presented by an imprint of sorts called 10000 Minutes Kids.

As the title makes clear, the album is about identity and serves as a constant reminder that despite day-to-day failures, followers of Christ can find their identity in Him and feel the assurance of His love. The title track opens with an energetic synth loop and a first-person lyric that bounces between proclamation and prayer. These are good words for kids to learn, and the song is catchy enough that they'll learn them quickly.

"Reflections of You" follows with a reminder--one of those great paradoxes of the faith: finding ourselves in Christ relies on casting self aside. The lyric is almost comically blunt: "As we gather, we surrender / Yeah we remember / That You are God and we are not." Another little contrast in the song, a pairing of "as we gather" with "as we scatter," is powerful.

Who I Am is almost entirely composed of synth-driven, up-tempo tracks that could work in a kids worship setting. Or, for that matter, in a student worship setting. Or an adult worship setting. In fact, if you didn't notice the script-font "Kids" on the top right of the album cover, you would be forgiven for assuming this was another standard worship album.

What does it say about modern worship music that an album aimed specifically at kids and families could pass so easily as a standard worship album? So many ingredients are common to both: upbeat, catchy songs based on simple and encouraging biblical truths, told with lyrics that aren't too complicated or deep. This is not a criticism of Timmons' album; it's a further realization that modern worship music remains stuck in a stubborn, unrelenting adherence to formula.

With that said, there are ways to separate children's worship music from the rest of the genre, however vapid it may sometimes be. Apart from occasional kids' voices on background vocals ("A Beautiful Thing," for example), the voice you'll hear is Timmons' throughout. Kids like to sing along with kids' voices (what are we on now, Kidz Bop 36?), so it might have been wise to let a few young ones take the lead on a chorus or two. The album also sticks a little too consistently with dance beats and busy loops; a slower ballad that eschews the loops would still work and add needed variety. Despite these weak spots, Timmons is to be applauded for taking an important message and aiming it at a generation that needs the reassurance offered by Who I Am.