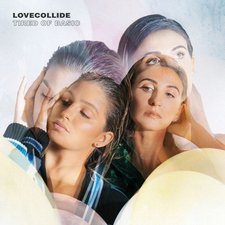 
You may have heard of LOVECOLLIDE before--after all, the sister duo from Hickory, North Carolina have been creating music since 2011, and they have already released two studio albums. What makes this latest album different, though, is that it marks Brooke and Lauren DeLeary's formal introduction to the music industry, with a new label (The Fuel Music) and new producers Matt Dally (Superchick) and Riley Friesen (Family Force 5, Group 1 Crew). Tired of Basic may be a much poppier effort than LOVECOLLIDE's previous albums, but it also proves to be their most daring album.

Album opener "Awake" comes out of the gate swinging, and it packs an urgent sonic punch, emphasizing the message in the lyrics: "once you come to faith / In everything you do / In every breath you take / There's no time to waste / Live like you're awake." The album continues to ride the wave of upbeat tunes, with the worshipful and eclectic "Undeniable," the experimental anthem of surrender "I Don't Want It," and my personal favorite, the super joyous and fun "IBIL" (which stands for "I Believe in Loud").

The most unique track on the album is "Take Me On," which brings to memory the account of Jacob wrestling with God in Genesis 32, with lyrics like "Take me on / Give me a new name my God / I need a heart change / Make something of my life when our worlds collide." The track makes effective use of distorted guitars and sound samples (you can hear breathing throughout the song) to convey the fight theme. The album itself takes a breather with the dreamy, ethereal "Maybe," a song that expresses doubt while still clinging to God. "Breaking My <3" is a song sung from God's perspective, conveying the pain God feels when a believer walks away and falls into ruin. Closer "X-Ordinary" sends the album out on a breezy, celebratory note, and it drives home the title of the album.

Tired of Basic has tight production that easily stands up to what is playing on mainstream secular radio, and the sisters' voices have never sounded better, but there's much more to this album than its catchy pop sound. Brooke and Lauren DeLeary are refreshingly vertical in their lyrical approach--there's no confusion here regarding who the sisters are singing about. The album not only exhorts the listener to dare to draw closer to God, but it also makes a call to action to live beyond the daily norm. If you're "tired of basic" Christian pop, give LOVECOLLIDE's latest a spin.