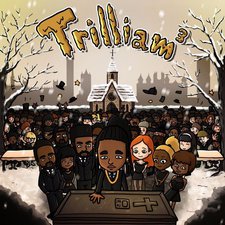 
One of the newer Reach Record artists, Aha Gazelle, has been very busy dropping a lot of new tunes over the last eighteen months. Current fans have come to expect Aha rapping and singing with his most unique vocal sound while keeping the songs fairly light and certainly fun. Trilliam 3 stays pretty much in the same lane in that respect. So with this being the third record is such a short time, what will the 24 year old rapper from New Orleans deliver this time around?

After a short introduction track, "Get Rich or Die Talking" begins the release with Aha's unique vocals laid over decent beats. The flow is on point, making this one a solid head noddin' track. The next couple of selections, "Dumb Dancing" and "Gold Medals," showcase the young rapper's singing abilities. Aha's singing is the type that fans are either going to love or hate due to its distinctive sound. The Reach artist gets a little deeper and personal at times on Trilliam 3, and the openness can be appreciated in songs like "Things I'll Never Try" and the third party song installment "All Black Party." In the former, Aha references purple rain to hide pain and speaks of using drugs to poorly medicate our problems, while the latter shares what is on his mind regarding race concerns in our nation. Fully aware he is hitting on a touchy subject, Aha says "Gonna make some people mad, but I'm gonna tell the truth though." With lyrical content like "they're not stupid, they just ignorant to the pigment" he may be accurate in his prior statement, but credit is given for the hip hopper using his platform to honestly share what he believes.

My favorite song on this release has to be "Boot Camp" featuring fellow Louisiana natives Tony Ri'chard and Starringo. The three rappers combine on this hard-hitting house party anthem and bring a ton of fire. Lyrical gems are laid throughout what is going to be one of the better hip hop joints of 2017, such as "Common sense ain't common sense / People blinded by some tint / Put some diamonds on my wrist / Bet they start to pay attention," "What on the earth is going on? / I guess they couldn't calculate / This a whole new world / well at least that's what Aladdin say," and "Check out how I stride, my glide like Clyde Drexler / I'm in the lab with Tony cooking like Dexter." At times, the hooks in Trilliam 3 tend to be simple and repetitive ("Dirty Dan" and "Transform," for example) and I personally don't love some of Aha's singing, but songs like "Rarris and Red Cups" and "Back In My Bag" hit home nicely for most fans of hip hop. Overall, this release is a kind of hit or miss listen.

For the most part, the beats are good, though not spectacular, and the content is generally kept on the lighter/more fun side. Aha is not your everyday rapper, so if you are into what most of the CHH scene is, you probably aren't going to enjoy Trilliam 3, but if you like something a little more outside of the box, this may be exactly what you need to be bumping.