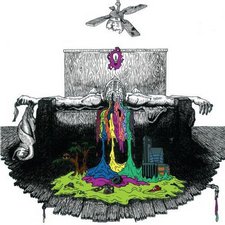 
In an industry that has an infamous tendency to get stuck in a rut, Twenty One Pilots is a band that has rejected that stereotype in almost every possible way. They are known for continually putting out new, fresh, innovative music with their signature keyboard-and-drums style mixed with thoughtful, almost poetic, lyrics. And their debut album is no exception.

The album kicks off with a minute and a half keyboard intro, jumping right into the dark-yet-deep "Implicit Demand for Proof," a song asking about the power and righteous justice of God. The theme of both God's power and His mercy is seen throughout the album, especially in "Addict With A Pen," which finds lead singer Tyler Joseph using the picture of a wayward son talking to a father to illustrate God's mercy toward us. It's a song full of symbolism, and is definitely worth several listens.

The album picks up its musical tone a bit when it hits "The Pantaloon" (note: a pantaloon is a character in a stage play who dies). Ironically, it's a song primarily focused on death, and yet, it is probably the catchiest song on the entire album. The song's message is significantly darker than its melody, yet it is not without hope, and this track is pulled off beautifully.

The album continues with many different themes as each song explores different aspects of life, death, thought, God, and our place in His plan. "March to the Sea" and "Ms. Believer" especially stand out in the back half of the album (the latter having a double-meaning). The album concludes with "Isle of the Flightless Birds." This song makes it clear that TOP wants to do more than create a few well-written songs that people can enjoy listening to; they craft an entire project from beginning to end, and at the conclusion of it, they expect something of the listeners. Posing a question of utmost importance, this song finishes with some of the most memorable lines of the entire album: "Your soul knows good and evil / your soul knows both sides / and it's time to pick your battles / and I promise you this is mine."

While some may not consider it their best work to date, and it is certainly far from perfect, Twenty One Pilots' self-titled debut is still an album to be reckoned with. This album is not one that should be missed, but it also comes with a warning: if you're looking for something catchy and more in line with current CCM, this kind of music is not for you. But if you are looking for ideas that will stay with you for hours after listening, paradoxical tracks that get stuck in your head for days, or songs that have a message so poetic yet so deep and clear that it is both challenging and refreshing, then give Twenty One Pilots a spin and just see where it takes you.