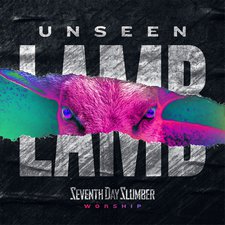 
Over the past several years, Seventh Day Slumber has shied away from the worship scene, focusing keenly on pure Christian rock. However, they made a return to worship this year, releasing their EP titled Unseen: The Lion back in August. That record featured four cover songs and one original. They are now releasing a second EP, titled Unseen: The Lamb, which completes the endeavor.

The album kicks off with a rocking cover of "Waymaker," and serves as a solid opener. While, in this reviewer's personal opinion, the song has been overdone, the band does a decent job putting their own spin on it. The original track "Unseen" comes next, carrying a dance/gospel vibe throughout its entirety. It's a unique style for SDS to attempt, but it works pretty well to shake things up a bit.

"Branches" follows this up, and is also an original tune. It is one of the strongest worship numbers the band has penned to date, as Rojas passionately sings, "Every leaf on every tree / Hears You whisper in the breeze / We lift our praises high / We lift our hands like branches to the sky." The EP closes with covers of "What A Beautiful Name" and "Run To The Father," which are both well done by the group.

Whether you want to combine both EP's to make a full record, or keep the two separate, both are solid offerings. The originals, while few and far between, are some of the band's best, and the covers are enjoyable listens. If you're looking for some worship to rock out to, or are fans of the band, Seventh Day Slumber has put together the project for you.