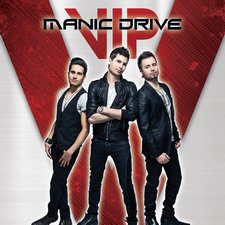 With VIP, Manic Drive continues to explore the power pop sound from their last album, Epic. Most of the songs on VIP have a big sound, boasting danceable beats and great hooks. Catchy choruses, anthemic drums, dance-pop guitar riffs, thick baselines, and dynamic synths are nicely wrapped in a glossy pop production. Like Epic before it, however, VIP does suffer from feeling overproduced in a few spots. And though the sound may be similar to their previous effort, the lyrical content has a different focus. On Epic, songs were themed around Christian party lyrics ("Halo" "Count of 123"). In contrast, the themes of VIP are more worship centered. While this transition is a step in the right direction, unfortunately the songwriting featured on this album is riddled with shallow analogies and cliché puns.

The disco-flavored "Rhythm" sounds really groovy, but falls flat with lyrics like: "Someone call the doctor 'cause this beat is sick." This pun would have been forgivable if it was one line in the song, but it is repeated nine times (or arguably 12). If that doesn't sound bad enough, the "sick beat" is the main theme of the song. Another example of these poor lyrics is found in "Fire," which has an overabundance of fire analogies. The first verse goes, "Catch a flame catch a flame and radiate / with a spark we can start to luminate / oh pass the torch we spread like wildfire / escape the darkness across this universe / shine brighter than a shooting star" and only continues with more fire analogies in the chorus: "Burn up the night / come together and blaze up the sky / let's set this world on fire, fire." And in the second verse? You guessed it, more fire.

The disappointing thing is that we have seen Manic Drive pen some amazing tracks when they were an alternative rock band ("Memories" and "Eleven Regrets" come to mind). Instead of focusing on quality lyrics, they seem to be focused on appealing to a more youthful audience. That's not to say all the lyrics are a miss. "Song To Sing" tells the personal story of someone stumbling into the church and finding solace in God through the hymn "How Great Thou Art" (part of which is sung during the chorus).

There are a few other tracks where the lyrics are decent, and because of that, it is easier to enjoy the music. "Good News" is an infectious track about sharing the Gospel. It is driven by a sweet acoustic guitar riff which is reminiscent of their song "Dancefloor" on Reset & Rewind. The intimate and worshipful "King of Mercy" might become popular on K-LOVE or Air1 radio stations. The catchy dance-pop tunes "Electricity" and "VIP" feature well-placed rap appearances from Trevor McNevan (Thousand Foot Krutch) and Manwell (Group 1 Crew), respectively.

If you can get past the weak lyrics scattered throughout the album, you may find that you really enjoy VIP. But for this reviewer, lyrics are the most important part of music, so it's hard to get into this album. If the same is true for you, you probably want to skip out on VIP and try for Family Force 5's new album (Time Stands Still) instead.