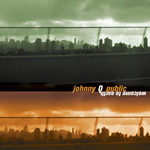 They're baaaack. After a head-turning debut in 1995 with Extra*Ordinary, johnny Q. public slowly and quietly slipped into the shadows... and had almost completely disappeared within 2 years. Five years later, the remaining fans are jazzed beyond belief to hear of the release of jQp's sophomore release, Welcome to Earth. The new album was recorded almost entirely live in the studio. The result? 12 well-crafted songs which are often more aggressive and emotional.

The album starts off with "Sliver," a fast-paced, hard modern rock tune with a tinge of an aggressive pop feel. As the song progresses, the band proves to the listener that they're back, and they are most definitely better than before. The songs that follow also reinforce this observation. An ever-so-slightly remixed version of Extra*Ordinary's "Body Be" takes the track 2 spot. "Body Be" had been the hit that originally propelled jQp to impressive heights after their debut. The video for the song was featured on MTV's "120 Minutes," a great accomplishment for a new Christian rock band, especially when the band was only 1 year old and this was their very first radio single...

In the same vein of some classic jQp, "Move" and "Violin Song" continue to offer infectious and catchy melodies and modern rock rhythms. "Preacher's Kid" from the debut album makes a reappearance here, except now known as "P.K." This rather depressing, yet brilliant song was originally inspired by an encounter with a preacher and his son he encountered years ago. Apparently the preacher completely ignored his son while the jQp member was over and this aided the story of pain and confusion that is illustrated in "P.K."

The band favorite "Hey Johnny" slams the audience with grungy guitars driving a creepy setting which is broken by a group chorus. This unique tune is seemingly the band's way of telling all that they're back and "haven't died." "Talk Show" is a sarcastic view of just that-- talk shows. Reminiscent of "Big Top" from their debut, Fritz' vocals whispers through the intro before the song converts to a fun oldies beat.

"Beautiful Face" and "Today" are two more strong rock tracks that help to conclude a fantastic sophomore project. And if the title track's pop/rock tune isn't enough, "Feeling Good Feels Good" appears as a hidden track and is a soft ballad that clocks in at a little under 6 minutes. It's odd arrangement and instrumentation and production will make it harder to accept for some jQp fans, but those characteristics make it all the more intriguing to listen to.

All in all, it's a fantastic follow-up to their debut project of 5 years ago and was worth the wait (although I'd have liked it a little sooner than 5 years). But I'll be looking forward to seeing where these guys take their their re-surfacing career. And, please guys, we don't want to have to wait till 2005 for the third record...