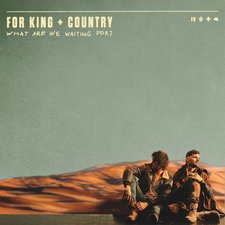 for KING & COUNTRY
What Are We Waiting For?


There is a great history of "brothers in bands" in Christian music, and rock 'n roll in general. The Everly Brothers spit-shined bluegrass harmonies in the late 50's and early 60s, while Rock & Roll Hall of Famers (and "brothers in a band") like Creedence Clearwater Revival and The Allman Brothers Band took family dynamics to glorious levels. Switchfoot, Family Force 5 and NEEDTOBREATHE have all featured brother-heavy lineups, and something about that familiarity certainly carries over to the creative process and the performance stage as well.

Brothers Joel and Luke Smallbone of for KING & COUNTRY have most likely been harmonizing their whole lives on one level or another. But while it's one thing to be brothers in a band, it's quite another to be co-lead singers and have unified vocals to the point of almost being one voice. What Are We Waiting For?, the duo's fourth studio album, features the Smallbone brothers' wondrous voices against a more electronic backdrop of songs than previously featured by their almost eight-person backing band. But though less organic than past releases, Waiting is full of compelling songs with warm tones and plenty of chilling, melodic moments.

Third track "Love Me Like I Am" is a lighter song, with a thin melody when compared to the two opening tunes. But fourth number "Unity (With Dante Bowe)" more than makes up for it with a minor key opening verse by Maverick City Music's Dante Bowe, and a chanted refrain that is both powerful and mysterious. "For God Is With Us" continues the strong electronic element to the music, with processed vocals and a great "loud / quiet" dynamic between the verses and chorus. "Hold On, Pain Ends" is heartfelt and sincere, but perhaps a bit too "on the nose" with its simplistic lyrics. "Unsung Hero" is a wonderful ode to the sacrifice and faith of parents, and the Smallbone parents specifically.

The album trades off lighter songs like "Hold On" and "Shy" with powerhouse ones like "TOGETHER (Featuring Kirk Franklin & Tori Kelly)," but does finish well with the encouraging "Seasons" and "Cheering You On." The closing "Benediction" ends things well, with slightly distorted vocals and a prayer to be like Christ in every area of life.

for KING & COUNTRY have earned their place as one of the biggest acts in Christian music today. With four very good albums under their belt, and sure-to-be sold out arenas on their future tour, the brothers have consistently made music that is both widely accessible and still artfully rendered. With a sorely needed theme of unity and togetherness in these troubled times, What Are We Waiting For? proves that you can have a few uneven moments (in life, or on an album) and still be wildly uplifting in what you do.