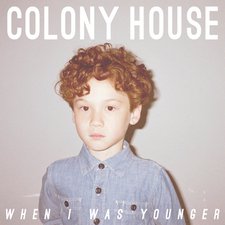 Colony House
When I Was Younger


Steven Curtis Chapman is undoubtedly one of the best CCM artists currently active. His music has sparked creativity, encouragement, and inspiration over the past twenty-eight years. So what happens when the talent of one of CCM's greatest pairs with the fresh creative minds of his sons? The result is When I Was Younger. Colony House has created some of the best ear candy around with their debut, but unlike the processed goods produced by other artists in a similar vein, When I Was Younger only gets more enjoyable with time.

From the first chord of the lead single and opening number, "Silhouettes," Caleb Chapman and co. show they're not afraid to let loose and have fun. Caleb's voice glides swiftly and smoothly through the course of the song, and the band flows effortlessly along. This same carefree atmosphere is also present in "Second Guessing Games," "Roll With the Punches" (complete with a children's choir), and "Waiting For My Time to Come," which is the strongest track on the record. Sung from the perspective of one who's waiting and longing for success, "Waiting For My Time to Come" holds everything a good song should have, and is worth many replays.

The up-tempo numbers don't take the entire spotlight, however. The record's ballads are, in their own way, even better. "Learning How to Love" is an honest confession of making mistakes and trying to make the effort to change: "They say that trust it takes time, that it's a mountain to climb, I think I am the reason why.... I've been waiting on things to change in my heart again, I've been changing, while waiting on, keep taking steps for you." Apart from being a highlight musically and lyrically, this track also showcases the versatile range in Caleb's voice. In "Glorious," Caleb longs for the day when his mistakes will be washed away and his sins redeemed: "I'm so tired of living like I don't have what it takes, and I'm still waiting for that day where I'm more than mistakes, and I will be glorious." This desire is answered in the record's final track, "Lose Control." It's when we lose all control, forgo the pursuit of perfection, and give our lives to Jesus that we become "more than mistakes." Although not explicitly a concept album, When I Was Younger plays out like a journey of salvation from beginning to end; from being alive and carefree, to realizing our wrongdoings and need for a Savior, to ultimate redemption in surrender.

Despite the good, there are a few minor factors that bring the record down, mainly the structuring. With most of the up-tempo tracks finding their home in the first half, the second half slows down considerably, with every ballad being stored in the end, save for "Moving Forward." While this does aid the journey, the record loses the momentum built from its first half. Another misstep comes in the song "2:20," a short rock jam that feels out of place and is arguably the weakest track of the bunch.

In the end, these setbacks are very minor when it comes to the overall quality of songs that make up When I Was Younger. Every song is enjoyable in its own way, each revealing character and identity, never becoming redundant or generic. If you're looking for an album that breaks the mold, yet one that still feels similar and relatable, Colony House's debut comes highly recommended.