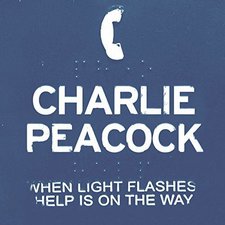 Charlie Peacock
When Light Flashes Help Is On The Way


Despite being one of the more prolific producers around (a la early Switchfoot for Christians and The Civil Wars for mainstream audiences), Charlie Peacock has maintained a fairly low-key artistic career for the past couple decades. Of course, his collaborative efforts with pop/rock outfits disguise what makes up much of his discography: jazz fusion. This might help to explain Peacock's lack of widespread popularity, but the eclectic instrumentation, pristine production, and staggering layering of themes on When Light Flashes Help Is On The Way proves that his unique musical touch should be heard by everyone.

Initial listens of this instrumental album may come and go without leaving much of an impact. The amount of improvisation (particularly on tracks 1-3) and lack of specific moments of musical unity might not grab people at first, but that only means that this is an album that demands close scrutiny. Listening to a somewhat float-y tune like "Automatt" works best with good headphones in order to grasp the insane amount of motives that the violin, guitars, keys, and saxophone parts all have.

The overwhelming depth throughout these songs is a testament to both the virtuosic level of collective musicianship as well as Peacock's keenness of seemingly disparate instruments harmoniously coming together. "Wendell Berry In The Fields At Night" begins with boomy toms and electronic glitches but eventually a reverb-drenched guitar, mandolin, saxophone, rhodes keys, and even an accordion become integral to the DNA of the track. It's a wonder that Peacock is able to combine these timbres into something that still feels explicitly jazz-y amidst a collection of catchy themes and an extended string of solos. Even more impressive is the fact that the track works within a single atmosphere the entire time: a groovy 4-bar loop held down by the drums and bass all the way through.

The first few compositions fit within this improvisational, endless groove idea, but the abrupt shift in tone to an arrangement of Daniel Lanois' "Still Water" provides a welcome change. This easy-going, nostalgic tone is then immediately abandoned for an atonal exercise in dexterity on "Samuel And The Iceland Indigo." The next two tracks paint a very sullen sonic landscape before finishing with "Gift Economy" - a return to improvisation with a rock anthem twist. These sudden deviations in mood can be quite jarring, but they also seem to create a narrative out of a 40-minute jazz album that makes it feel complete.

Ever the intentional producer, Peacock has assembled a group of compositions that can appease jazz fans due to its improvisatory nature, general music fans due to its diverse instrumentation, and probably everyone due to its amount of impressive musicality. There is a lot to love here, and even if the style isn't in your wheelhouse, I'd recommend giving this one a listen just for the sake of being inevitably awed.

Given the fact that he'd already mastered pop, rock, funk, new wave, singer/songwriter, and blue-eyed soul prior to the turn of the new millennium, an eventual foray into jazz must have seemed all but inevitable for Sacramento-area native Charlie Peacock. His latest offering, the third installment in his jazz catalog, begins with "Wendell Berry in the Fields at Night," a breezy, infectious combination of the jazz, dance and pop formats that shows Peacock to be an absolute master of all three. Elsewhere, he migrates to either side of that cut, alternating between progressive fare ("Blue Part Two," "Samuel and the Iceland Indigo") and decidedly more pop-oriented offerings (the cover of Daniel Lanois' "Still Water"). The album's most sublime point, though, comes with the transcendent, and aptly-titled, "The Intimate Lonely," which could well function as a template for young artists seeking to learn how to establish, and maintain, a tangible sense of mood in their compositions. Throughout the proceedings, Peacock's sensibilities are never less than consummate, meaning that even those who aren't enamored with the jazz idiom may well find themselves getting drawn into the wake of the new release's undeniable energy and sparkling production. That said, given its largely subtle aesthetic, those who listen to the record casually, or only once, run the risk of completely glossing over its most potent asset - Peacock's relentless attention to texture and detail. It was these strengths that first brought the versatile Californian to prominence in the mid-'80s, and they remain every bit as sharp, here in the present day, as they were three-plus decades ago when he first began practicing his craft. - Review date: 2/24/18, written by Bert Gangl