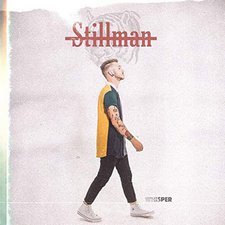 
Hailing from Little Rock, Arkansas, worship artist Jacob Stillman (who goes by the stage name Stillman) is relatively new to the worship scene, making his debut with an EP titled Whisper, released through Integrity Music. After searching for his place in the industry for years, he finally found his footing leading worship at various churches, which has led into him creating his own music, and signing his first record deal. So, what does Stillman bring to the table with this release?

Opening up the EP is the comforting "Draw Near," a song that speaks of God's desire for His children to draw near to Him. This track sets the tone for the EP, as many of the songs focus on the general idea of being close with God, and hearing His voice. The funky and honest "Shook," a previously released single, serves as a solid addition and is one of the stronger tunes featured here: "I'm shook by the way that You love me / Too long have I run from this place / I know that You've been waiting for me and my hardened heart to come back home." The reflective "Wherever You Are" showcases Jacob's desire to be wherever God is, and letting Him take control. "Let Go" and "Keep Movin' On" both follow in the same vein, focusing on different aspects of perseverance and surrender. Closing out the EP is the title track, which wraps things up cohesively and smoothly, as Stillman passionately sings about how he wants to feel God's presence.

Generally speaking, Stillman has created an enjoyable debut that will be received well by many. With that being said, there is certainly some room for improvement, especially if he wants to stand out in the overcrowded worship scene. While his lyrical content is above average, from an artistic standpoint, he doesn't necessarily pack the punch he could, focusing too much on electronic/hip-hop elements at times. With that in mind, he has quite a bit of potential, and shows great promise for the future. For fans of the current pop/worship scene, Stillman is someone to keep an eye on.