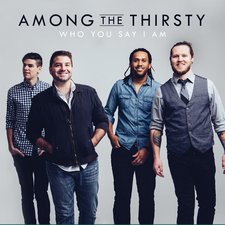 Among The Thirsty
Who You Say I Am


Sometimes familiar is fine, and sometimes familiar is deceptive. The piano line that opens "What Love Looks Like," the opening track on Among The Thirsty's Who You Say I Am, is both jaunty and easily recognized. However, it kicks off a song that is equally familiar (think 10+ years of the television show American Idol), yet still of quality. This song likewise takes an over-familiar subject (love) and turns the theme slightly askew to challenge the touchy-feely version of love that too easily comes to mind, "I've always heard love don't come easy / It's got a price that's hard to pay / But if that's the truth / Why do I spend my life pretending that its free?" An opening line like this is more thought-provoking than it first seems, and Who You Say I Am is full of many such moments.

The title track likewise has a well-known structure with somewhat typical musical dynamics. But underneath the polish are some poignant lyrics about God's love changing one's identity; that we have been "redefined by love." A phrase like this, taking a classic concept and giving it a slight spin, shows that there is much more to God's love than we could ever realize and reveals a deeper artistic sense than the pop sheen of the song would suggest.

First single "Completely" has the nice lyrical couplet "complete me, because I am yours completely," but suffers from over-production and an uninspired melody. The fourth song, "Trust," thankfully shakes up the musical pallet a bit with some nice use of a plucked string section. "Beautiful Life" ups the tempo a bit with a cheerful piano and synthesizer refrain, which helps to lift the song up from its over-used theme.

Among The Thirsty brings to mind the first efforts by Tenth Avenue North and OneRepublic, two bands who have grown on every subsequent album they have released. It seems that Among The Thirsty may too grow beyond the influences and trappings of their radio-friendly sound too. Who You Say I Am shows a band with a knack for a hook and a promising future.