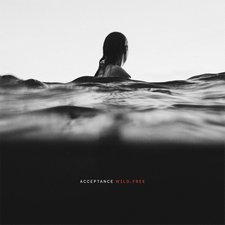 
If, upon reuniting five years ago following a decade-long hiatus, Acceptance's primary two options were to remake Phantoms or remake themselves, the band chose the latter. 2017's Colliding by Design saw a departure from big power chords toward 80's synths and soundscapes, with the touch of producer Aaron Sprinkle looming heavily over the proceedings. It was a solid return that still holds up; however, the mere occasion of Acceptance's reunion was more exciting than the music itself, which was essentially a watered-down version of Jonezetta's Popularity. The trajectory of Acceptance's genre-shift continues on 2020's Wild, Free, which sees the band further trading in 2005 nostalgia for 80's nostalgia -- albeit lacking the confidence, vision, and stellar songwriting that has made similar transitions successful for bands such as Paramore -- replete with nonstop synths, pulsing bass, an overabundance of distracting vocal effects, and the general sense that the music was written using computers more than guitars and pianos.

What's perhaps most unfortunate about the style and sound of this third album is how it places an undue weight upon vocalist Jason Vena, far more than any other member (including Anberlin and Search/Rescue alumni Christian McAlhaney and Kaylan Cloud, respectively, who each got to riff and solo far more frequently on Colliding). While Jason's genuinely beautiful, emotive voice has always been a major draw for the band, his lyrics have debatably been the band's greatest weakness. You can tell how great the reliance on Vena is when, on over half of these tracks, he begins singing within the first five seconds -- as if the band couldn't even be bothered to write introductions or musical hooks. (This is particularly awkward on opener "Midnight.") And while the massive, guitar-laden sound of Phantoms made the perfect cover for Vena's vague, often redundant or nonsensical lyrics, Wild, Free places far too much focus upon them. The biggest offender is the dull, momentum-killing ballad "Bend the Light," where the synth pads and U2-styled guitar leads offer nothing to draw your attention from Vena singing lines like, "It's so hard to pretend / When you feel like I feel / It's so hard to pretend / When you see like I see" multiple times in a row. Similarly, "Dark Age" gets hampered by its cliched lyrics, dragging down an instrumental track that deserved better.

While there's certainly good music to be found on this album, Acceptance gives fans little reason to listen to it. The best songs can't approach the heights of Colliding's best, "Come Closer" and "Sunset." Meanwhile, almost all the highlights were already released on the Wild EP earlier this year -- which is ironically much like when labelmates Mae reunited, signed to Tooth & Nail, then released an EP with all the best songs from an upcoming full-length. That said, you might already be familiar with "Cold Air," which boasts the album's catchiest chorus, despite being supported by jagged, unnatural drum patterns and some odd harmony choices. And "Wasted Nights," which is almost great, botches its landing due to a strange splattering of overlapping chorus vocals, making the song frustratingly difficult to sing along with. I find myself hard-pressed to find a song that's entirely praiseworthy, as the band leans into their less fortunate traits (awkward transitions between verses and choruses, odd lyrical phrasings, back-to-back melodies that don't fit well together), all the while backed by production that's more cluttered than Sprinkle's dependably spotless work.

The closer, "At the Edge of the Earth," at least carries a triumphant sense of closure that leaves a good taste in the mouth. The song (which might be my favorite overall and is easily the best song not included on the EP) has a Killers-lite mixture of new wave and Americana that points to an exciting direction for Acceptance to pursue in the future. And I really do hope we get more music from the band -- two pretty great records out of three certainly isn't a bad track record -- but following Wild, Free, I'm expecting there to be as many fans pleased with the new music (especially those most given to 80's nostalgia) as there are fans who wish Acceptance wouldn't have reunited at all. It saddens me when fans clamor for artists to keep making the same album over and over, without giving them a chance to grow and change; my critique isn't that Wild, Free is too different than Phantoms. But to venture successfully into the future, the band desperately needs to discover what their greatest strengths are and stick to those.

(Editor's note: The song "Son of the City" has a chorus that repeats the words "this hurts like h*ll")

When Acceptance returned in 2017 after a 12-year hiatus, they did so with such an unexpected shift in sound that youd not guess it was the same band that released Phantoms. Colliding By Design leaned very heavily into more of a pop rock sound, a decision that is carrying over into their Tooth & Nail debut, Wild, Free. This time around, though, the album feels heavily influenced by The Killers and The Gaslight Anthem, putting it closer to the alternative world than before. Wild, Free has some standout tracks, such as Cold Air, Dark Age, and Wasted Nights, but for the most part, its not super interesting. It may be a step up from Colliding By Design, though, even if only on a purely subjective level. Overall, its not an exciting release, and I dont see myself ever returning to it. - Review date: 9/3/20, Scott Fryberger of Jesusfreakhideout.com