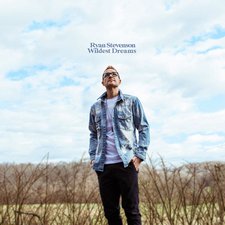 
Here in the days of racial unrest, financial uncertainty and rampant sickness, a little levity and optimism goes a long way. Of course, no single album can hope to solve all of the worlds problems, but Wildest Dreams, the latest outing from Oregonian paramedic turned performer, Ryan Stevenson, does manage to interject a welcome dose of hope of light into what has become a decidedly bleak first half of the year.

The title track, with its buoyant rhythms and sunny disposition, springs from the same fountain as the infectiously cheerful pop of artists like Jordan Feliz and, especially, Jason Gray. Mercy in the Dirt is a funk-fueled declaration of self-worth and the Divine mercy upon which it rests. The overarching outlook of Best Is Yet to Come is as perceptive as it is positive. And the tongue-in- cheek litany of decade-dependent mementos like Obsession cologne, eyebrow slits and the almighty Ace of Base renders My 90s a guilty, but undeniable, pleasure.

Lest he be accused of trading solely in blind optimism and broad generalities, Stevenson shows himself more than capable of capturing the realities of lifes less-than-ideal side. The chorus of When We Fall Apart is built upon the last words his mother spoke to him before dying from bone cancer in 2009. With Your Life offers a stark and honest snapshot of pain felt by a son whose father rarely verbalized his love. And Through It All ("Woke up from a long night/ Hoping for the sunlight/ Just another cloudy day") could well be considered a musical exclamation point of sorts to both of the aforementioned songs.

Objectively speaking, Stevensons previous efforts have been pleasant, if somewhat generic, showings. While he does continue to wander down the now overly familiar radio-friendly pop road that rendered a sizeable portion of his back catalog less than completely engaging, that tendency is kept mostly to a minimum this time around. Dreams wont set the pop world on its ear or start any new musical trends, but it does hold a place as Stevensons most consistent offering to date, making it a necessary purchase for existing fans and an album worth investigating by those who appreciate smooth, well-crafted inspirational pop.

Summertime demands music that is groovy, and Ryan Stevenson has consistently delivered smooth, tuneful and earnest songs that flow easy and engage the soul at the same time. From his work writing with TobyMac ("Speak Life," "Lift You Up") to arguably one of the most notable songs in Christian Music of the last ten years ("In The Eye Of The Storm"), Stevenson has consistently brought the melody and easy beats in spades. And his latest album, Wildest Dreams, continues to bring the summer vibes and worshipful songs in equal measure.

Opening track, and first single "Amedeo (Still My God)" bursts from the speakers with a clever use of a Latin phrase for "lover of God" and a compelling message about the Lord holding onto us in the toughest times: "Life can take our breath away / Tragedy can leave a wake / A broken heart won't ever beat the same / Pain can stop us in our tracks / Losing what we can't get back / Shaking the foundations of our faith / No matter what's in my way / No matter the battles I face / You are still my God / You're still my rock." The unique, chanted use of "amadeo" gives the song a sonic flavor that lifts it from the good to the great. The following title track is a bit of a step down in creativity, but still scores points as a heartfelt song of testimony to the Lord taking us beyond "our wildest dreams" in His good plans for our lives--if we surrender those plans to Him. "When We Fall Apart" is a beautiful song to a lost loved one who imparted the tender words "sometimes the only way to heal a broken heart is when we fall apart." The sunny, Caribbean-inflected "All I Need" features a great guest spot from former Gotee Records surfer dude / singer-songwriter Paul Wright, and Stevenson's old duet partner (last seen together on "Eye Of The Storm") GabeReal of TobyMac's Diverse City band. The following, goofy "My 90's" is a smile-inducing stroll down memory lane for anyone who came of age in that "alternative" decade. With about one hundred-plus 90's references packed into its three-minute runtime, the song is a fun one to hit replay on. Ending with another song for his recently-deceased father, "Told Me With Your Life," Stevenson goes from hill to valley perhaps a bit too abruptly, but there is no denying his songwriting skills and heart to connect his listener with the Grace of God, who can be seen in both the hills and low points of life.

Sometimes, particularly when the world is a crazy, upsidedown place, it's a great pleasure to take a long drive on a sunny day with the windows down and a great, positive soundtrack on the stereo. Wildest Dreams is a great album for just such a trip. - Review date: 6/29/20, Alex Caldwell of Jesusfreakhideout.com